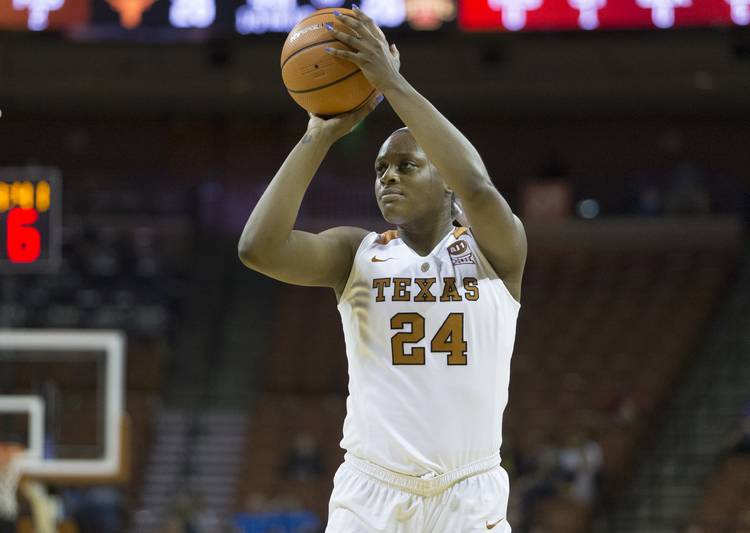 Texas forward Joyner Holmes helped a defense that easily won the battle of the boards. (Stephen Spillman / for AMERICAN-STATESMAN)

In a tight game, Indiana took the lead for good on a bucket with Bendu Yeaney with 2:31 to play.

Texas had a chance when it trailed 67-65 with 30 seconds to go. But Sug Sutton apparently slipped while trying to catch a pass near the Longhorn bench. The ball went out of bounds and IU iced with a pair of free throws by Ali Patberg with 12 seconds to play.

Danni Williams, playing her final game for Texas, led the Horns with 15 points.

Texas turned the game around with a sensational second quarter, led by Destiny Littleton, who scored 8 points in the first half.

The Longhorns, who trailed 23-17 after one quarter, outscored the Hoosiers 20-6 in the second quarter to take a 37-29 lead at halftime. Joyner Holmes established herself early, contributing 8 points and 8 rebounds by halftime.

IU came out strong in the third quarter, outscoring the Horns 14-3 in the first five minutes of the period.

Texas made its 32nd appearance in the NCAA Tournament, which ranks fourth-most of any program in NCAA history. Texas is 42-31 in NCAA Tournament play, including a 10-6 mark under head coach Karen Aston.

Texas women in fifth after second day of NCAA Championships