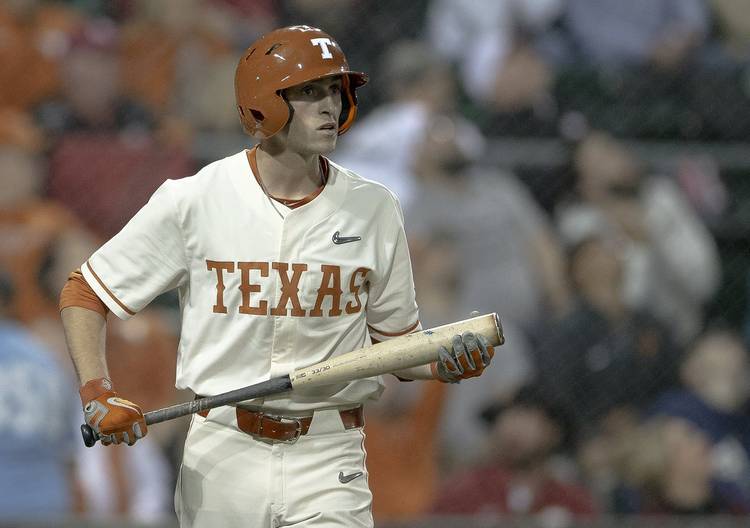 Texas outfielder Duke Ellis (11) walks back to the dugout after striking out against Arkansas on March 20, 2019 in Austin. [NICK WAGNER/AMERICAN-STATESMAN]

Following a rough week, Texas moved down to the No. 13 spot in the D1Baseball poll on Monday.

Texas (17-10) was ranked ninth last week and it did record two wins over Arkansas and TCU. The Longhorns, however, opened the week with an 11-4 defeat against the Razorbacks. UT then fumbled away two late leads in its 3-2 and 12-8 losses in Fort Worth.

Ranked 11th and 22nd last week, Arkansas and TCU snagged the No. 8 and No. 19 rankings in this week’s poll.

This will be UT’s lowest ranking since the first week of the season. This also marks the first time this year that Texas has fallen in the D1Baseball poll. (Earlier this month, Texas held onto a No. 12 ranking despite losing three of its four games at Stanford.)

Despite UT’s losses, the Big 12 still honored sophomore Bryce Elder and freshman Eric Kennedy as its pitcher and player of the week on Monday. Elder struck out seven Horned Frogs over an eight-inning no decision on Friday. In addition to driving in four runs, Kennedy had as many runs as outs (five) in the TCU series. This marks the second time that Elder has been named the Big 12’s top pitcher, while Kennedy had previously been named the conference’s newcomer of the week.