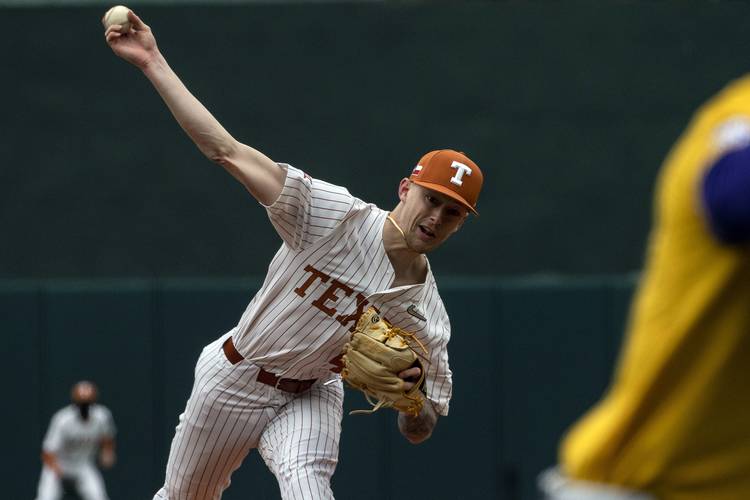 Texas pitcher Coy Cobb (seen in a 2019 game) was victimized for a couple of unearned runs early against Missouri. [Rodolfo Gonzalez/for Statesman]

After opening the weekend with two 6-5 wins over Xavier, Texas walked off with a win of the same score at UFCU Disch-Falk Field on Sunday.

Xavier starter Conor Grammes issued two bases-loaded walks in the first inning, and UT also scored on a groundout. The Musketeers got runs in the third and sixth sessions before Lance Ford gave Texas a 4-2 lead in the seventh session with a RBI single. For the second time this weekend, however, Xavier scored twice in the eighth inning to tie the Longhorns.

In the ninth inning, Xavier (9-18) got its leadoff hitter to second base when shortstop Masen Hibbeler threw away the baseball while trying to make a tough play on Ryan Alterberger’s infield single. With two outs, Jake Shepski singled in Alterberger to put Xavier on top. Texas got two runners aboard with two outs in the ninth inning’s bottom half before Tate Shaw doubled off Taylor Williams to end the game.

Freshman reliever Cole Quintanilla was credited with the win on Sunday. Texas freshman Coy Cobb allowed five hits over a seven-inning start, but he remained winless on the season following a collapse by his bullpen.

Texas improved to 20-11 with the win. The Longhorns are just ahead of the pace set by last year’s team. In 2018, Texas did not record its 20th win until its 32nd game.

This marks the third time this season that UT has started five freshmen in one game.

NOTABLE NUMBER: 14. The run-scoring walks issued to Peter and Shaw were 13th and 14th drawn by UT with the bases loaded this season. Texas has produced 11 hits with the bases loaded. Shaw has driven in four runs this spring with bases-loaded walks while both Ellis and Ryan Reynolds have earned three of those free passes.

UP NEXT: Texas A&M will be UT’s guest at UFCU Disch-Falk Field this upcoming Tuesday. The Aggies and Longhorns were ranked 10th and 13th in the most-recent D1Baseball poll.  The rivals split last year’s two games, but UT’s win was recorded in a NCAA regional.

Ranking raises set up a marquee midweek meeting between No. 9 Texas A&M and No. 12 Texas