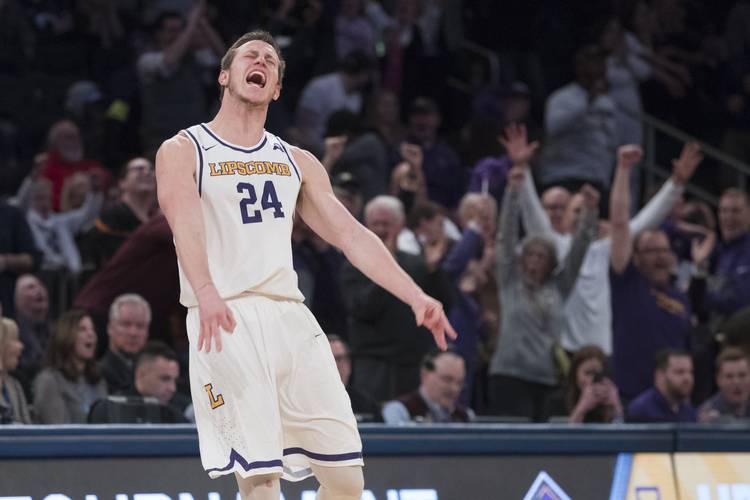 Lipscomb guard Garrison Mathews reacts after scoring a 3-point goal bringing Lipscomb ahead in the last minutes of the second half of a semifinal college basketball game in the National Invitational Tournament against Wichita State , Tuesday, April 2, 2019, at Madison Square Garden in New York. Lipscomb won 71-64. (AP Photo/Mary Altaffer)

About the Longhorns: Ramey said the Horns’ main focus in New York is sending seniors Kerwin Roach II and Osetkowski out as winners. Roach, a key cog in Smart’s four-season tenure, is grateful. “When opportunities are given to you, you just have to seize it,” Roach said. He currently ranks 17th in UT scoring history with 1,395 career points and can move past Chris Mihm against Lipscomb. “Whenever you’ve got something in front of your face, you’ve got to go all out,” he said. In four NIT wins, the Horns have held opponents in check from 3-point range. Opposing teams have shot 27.2% beyond the extended arc. In UT’s 16 losses this season, opponents shot 42.6% from downtown. Texas is now 10-3 in five all-time appearances in the NIT.

About the Bisons: There was a sea of purple-clad Bisons fans at the Garden for the semifinals. “We had like a sea of purple come in all at once and I was pretty shocked about it, seeing all those people come,” Matthews said. Lipscomb captured a 71-64 win over Wichita State in what was a seesaw affair. “I won’t say we got great shots but we didn’t have turnovers,” coach Casey Alexander said afterward. The Bisons are strong shooters all over the floor — 54.1% from 2-point range, 37.7% from 3-point land and 75.7 percent at the stripe. It’s a team that typically makes anywhere from 8-11 3-point shots per game. Texas’ perimeter defense has been its Achilles heel all season.