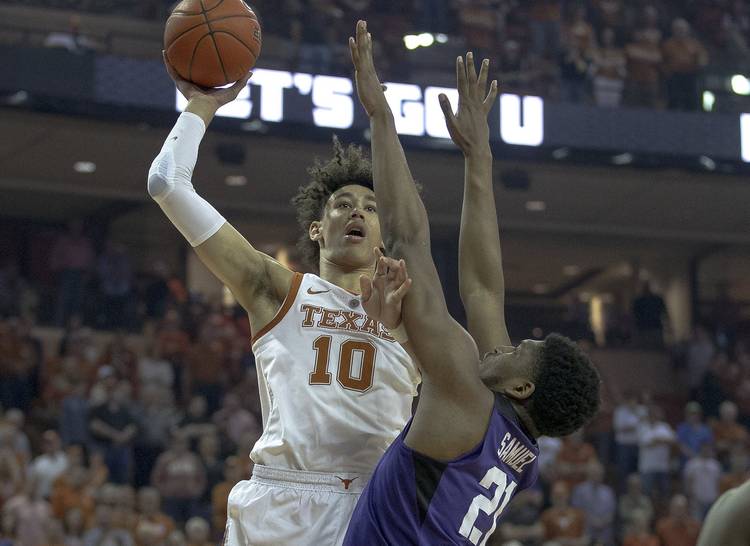 Texas freshman Jaxson Hayes was supposed to be an anchor for the future. Instead, he’s merely the latest one-and-done Longhorn headed to the NBA draft.

The school announced Thursday what practically everyone inside Cooley Pavilion already knew. Hayes will hire an agent and start immediately on his pro future.

In a statement, Hayes thanked his family and Texas coach Shaka Smart “for pushing me every day to improve and mature, both on the basketball court and as a person.”

“I would also like to thank everyone else who has helped support me,” Hayes said in the statement. “Lastly, thank you to all the Longhorn fans and the people of Cincinnati who have been there cheering me on the whole way.

“With that being said, I have always dreamed about playing in the NBA,” he continued. “Now that I have the chance to realize that dream, I would like to pursue that opportunity. I am declaring for the 2019 NBA Draft and will be hiring an agent.”

Hayes averaged 10 points, five rebounds and 2.2 blocks per game en route to becoming the Big 12 freshman of the year. He missed the entire NIT championship run due to a knee injury suffered at the Big 12 tournament.

Hayes is likely to become the Longhorns’ third consecutive first-round draft pick. Jarrett Allen (2017) and Mo Bamba (2018) had different skill sets. Hayes has high upside potential with his ability to dunk and score from point-blank range. But his mid-range game needs work along with his rebounding. Hayes did not have a single double-double during his lone season at UT.

Still, the 6-foot-11 big man from Cincinnati, Ohio, the son of two athletic parents with deep knowledge about the business of pro sports, probably had to go. Hayes is projected to be a NBA lottery pick on most mock drafts, setting him up for a life-changing payday this summer.

At the Big 12 tournament in March, Hayes demurred when pressed about his decision. “If I want to stay another year, I can stay. If I want to go, I’ll go,” he said. “I’m just going to take time to think about it, because my family doesn’t need the money. We could use the money, obviously, but it’s not like we need it.”

Deep down, Smart knew Hayes wasn’t likely to stick around for another year given how the athlete progressed this season.

“I’m really proud of Jaxson for the tremendous attitude he’s demonstrated all year and the unprecedented growth he’s made,” Smart said in a statement. “He’ll always be a part of our Longhorn basketball family, and we look forward to supporting him in the next steps of his journey.”