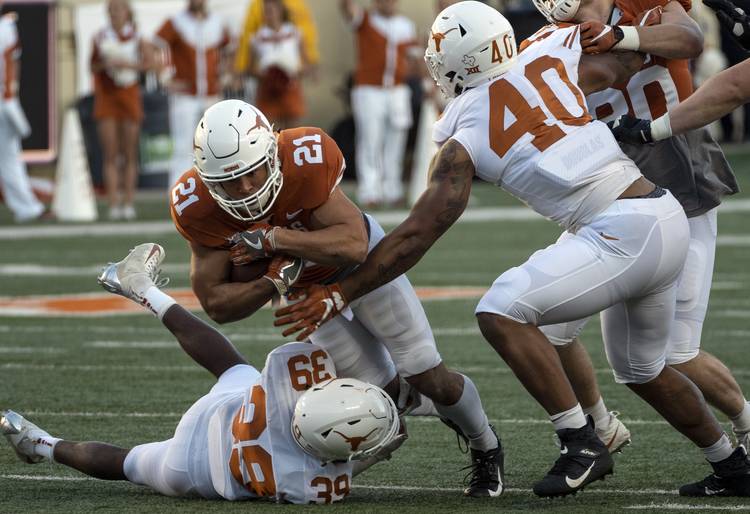 University of Texas running back Jordan Whittington (21) is tackled defensive back Montrell Estell (39) as linebacker Ayodele Adeoye (40) reaches over to help during the Orange-White spring game held at Royal-Memorial Stadium on Saturday, April, 13, 2019, in Austin, Texas. [Rodolfo Gonzalez for AMERICAN-STATESMAN]

There wasn’t a whole lot of offense on display at the Orange-White game, but freshman running back Jordan Whittington looked anything but a newcomer from first glance. The Cuero product is big and fast — a great combination for a player of multiple skill sets — and will provide a great complement to Keaontay Ingram, who has added 15 pounds of muscle to his frame.

Whittington can run it and catch it, as displayed by his Texas debut Saturday — 62 yards rushing and 27 receiving — and there’s a sense that we just got a small glimpse at what he’s fully capable of doing. Coach Tom Herman even mentioned him when talking about the receiving corps after the game. I would expect to see him lined up out wide to get favorable matchups this fall with Ingram in the backfield.

That’s one thing about having weapons: You can put them anywhere as long as you find a way to get them the ball. Whittington is one of those types.

For the rest of Cedric’s Nuggets, including his thoughts on Tiger’s Masters win and the NBA playoffs, click here.

‘I want to see performances’: Can Matteo Bocchi turn in a strong midweek start for Texas?