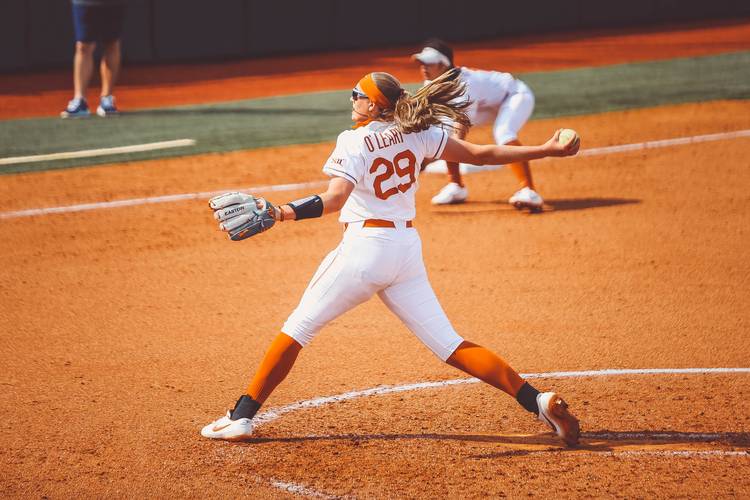 Texas pitcher Shea O’Leary is one of 25 candidates for the Schutt Sports/National Fastpitch Coaches Association Division I National Freshman of the Year award, it was announced Thursday.

O’Leary is 12-1 and set a freshman record for UT, starting her career 11-0. She pitched a perfect game March 27 against Baylor and leads the country in ERA with a mark of 0.51. O’Leary has pitched nine complete games and four shutouts. She has struck out 54, and opponents have hit just .156 against her.

The native of Castaic, Calif., made 63 pitches in her perfect game against Baylor. It was the 10th perfect game in UT history. O’Leary joined Texas legend Cat Osterman as the only freshmen to pitch a perfect game for the Longhorns.

O’Leary also has a no-hitter on her résumé, against Longwood on March 6 as she made just 40 pitches in the five-inning, run-rule win. She is one of seven Texas pitchers with two no-hitters during her career.

The 25 candidates will be pared down to 10 on May 9 before the top three finalists are revealed May 21. The award will be presented at the annual Women’s College World Series banquet in Oklahoma City on May 28.

The Longhorns started a three-game series with No. 1 Oklahoma on Thursday night.