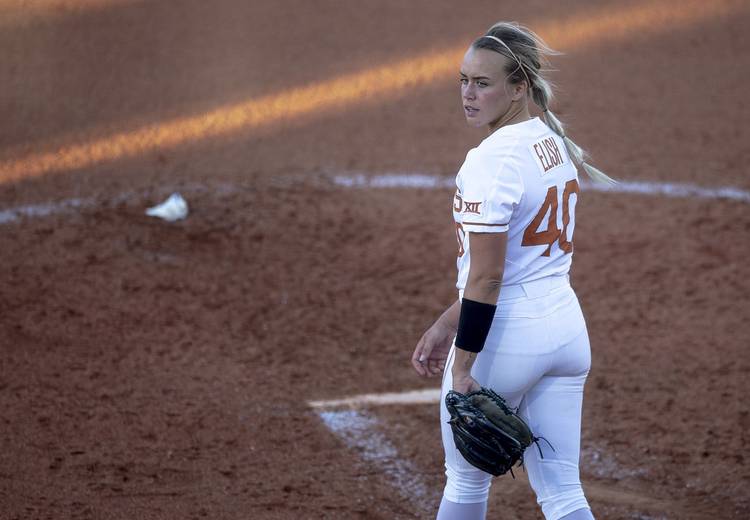 Texas pitcher Miranda Elish (40) looks to the dugout after giving up a run against Oklahoma during an NCAA college softball game on Thursday, April 18, 2019, in Austin, Texas. [NICK WAGNER/AMERICAN-STATESMAN]

Two runs scored in the top of the eighth inning put Oklahoma in position to beat the Texas softball team 4-3 at McCombs Field on Friday night.

Texas (36-11, 7-5 Big 12) once again flirted with defeating the top team in the country but came up short on the final play. Janae Jefferson hit a bunt single and Kaitlyn Slack scored on a throwing error, but MK Tedder got thrown out at home as she tried to score the tying run. Jefferson beat the throw to first base as the ball ended up in right field.

A sacrifice fly by Caleigh Clifton scored Sydney Romero before Fale Aviu stole home in the top half of the inning.

The Longhorns got off to a good start, plating a run in the first inning. Mary Iakopo singled to drive home Jefferson. Iakopo and Jefferson each had three hits in the contest.

Oklahoma took its first lead in the fourth inning when Clifton scored on a throwing error and Grace Green singled to drive home Raegan Rogers.

Texas tied the game for the final time when Slack reached base on a bunt and Tuesday DerMargosian scored.

The loss for UT hands the series to Oklahoma and is the second series loss out of three in conference.

The Texas softball team will try to salvage a win in the series finale Sunday at 1 p.m.