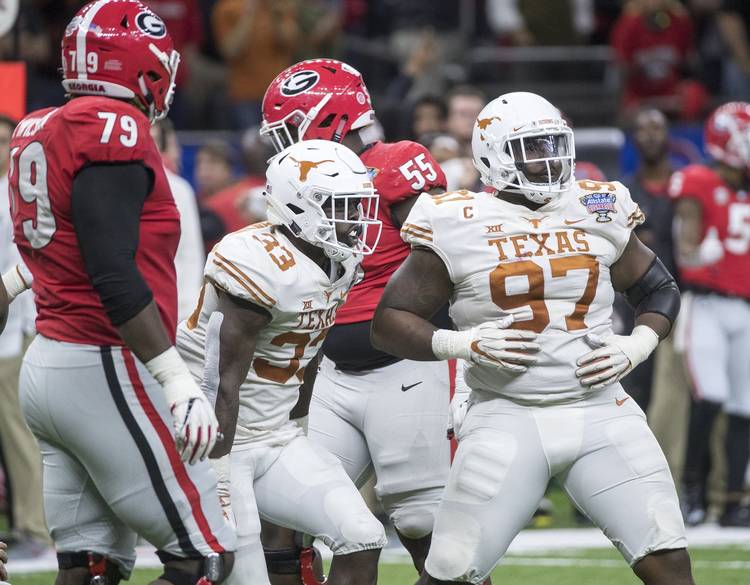 Texas defensive lineman Chris Nelson (97) and linebacker Gary Johnson (33) celebrates a stop against Georgia during the Sugar Bowl in New Orleans on Jan. 1, 2019. [RICARDO B. BRAZZIELL/AMERICAN-STATESMAN]

Charles Omenihu and Kris Boyd were the only Longhorns taken in the NFL Draft over the weekend, but many of their Texas teammates could still join them at the next level.

Undrafted players from Texas have recently found success in the NFL. Three undrafted free agents from UT’s 2018 draft class made NFL rosters this past season, and both defensive tackle Poona Ford and cornerback Holton Hill started at least once. Adrian Phillips, who went undrafted in 2014, made his first Pro Bowl in 2018. Justin Tucker is now the NFL’s highest-paid kicker.

So far, nine Longhorns who weren’t selected in the 2019 NFL Draft have announced their next steps:

Congrats to Captain Andrew Beck on signing with the @Patriots

Love ya… so proud of ya!

Tight end Andrew Beck produced 28 catches, 281 yards and two touchdowns during his senior season at Texas. Once a three-star linebacker and Mack Brown’s last recruit for the Longhorns, the 6-3, 252-pound Beck caught 12 footballs and established himself as a run-blocking option from 2014-16. Despite missing the 2017 season with a foot injury, Beck served as a team captain for the last two years.

Gary Johnson arrived in 2017 as a transfer from Dodge City Community College. He earned a starting gig during his first year on campus and then led the Longhorns this past season with his 90 tackles. The six-foot, 226-pound Johnson made headlines at the NFL scouting combine when he was timed at 4.43 seconds in the 40-yard dash. LSU’s Devin White, who was taken fifth overall, was the only linebacker with a better time.

A graduate transfer who grew up in the Austin area, Calvin Anderson started 14 times for a Texas offense that ranked 46th nationally with its 31.1 points per game. Between Rice and Texas, Anderson closed out his career with 50 straight starts. The 6-5, 292-pound Anderson was not invited to the NFL scouting combine, but his 30 reps on the bench press at UT’s pro day would have bettered all but five of the 37 linemen who participated in the drill in Indianapolis.

God is good!!!🙏🏾 Proud to say that I’m a @steelers thank you to the entire organization. All I needed was an opportunity! #LetsGoToWork https://t.co/QaNsQa4KAz

Chris Nelson was used to replace Ford, his good friend and fellow 2014 signee, in the middle of UT’s defensive line this past season. He also has experience as a defensive end. At Texas, the 6-1, 298-pound Nelson started 29 times and made 109 tackles. UT coach Tom Herman expressed dismay that Nelson and Beck were snubbed by the NFL scouting combine, but Nelson later said “I felt good about” his performance at the Longhorns’ pro day. One person he may have impressed that day was Pittsburgh’s Kevin Colbert, who was the only general manager in attendance.

We going to continue to get it out the mud❗️#WhoDat

This past season, Lil’Jordan Humphrey led Texas with his 86 catches and 1,176 receiving yards. One of Humphrey’s nine touchdown catches was recorded with 21 seconds left in a 41-34 win at Texas Tech. He also was UT’s first non-quarterback in 36 years to record a passing, rushing and rushing touchdown in a season. The 6-4, 210-pound Humphrey was advised by NFL’s College Advisory Committee to return to school but later told reporters that “I just felt like it was my time.” Humphrey had a sub-par showing at the NFL scouting combine in February and was not one of the 28 receivers drafted.

Over Texas’ past 18 games, Davante Davis started at cornerback in 16 of those contests. The 6-2, 202-pound Miami native totaled 119 tackles and four interceptions in his career. In a seven-point win at Texas Tech this past fall, Davis intercepted a pass and forced a fumble in the red zone. Two of Davis’ former teammates — Ford and Tyrone Swoopes — have made it as undrafted free agents in Seattle.

Very blessed to be able to go to a rookie mini camp for the Baltimore Ravens and to have this oppurtunity to prove myself. To fight for the last spot for an official contract. This has been an amazing journey, but only the beginning. #JobInterview #RavenUp

A 6-2, 324-pound guard, Patrick Vahe was a mainstay on the Texas offensive line over the past four seasons. Vahe started in the first game of his freshman year and made 44 starts after that. Like Anderson, Vahe recorded 30 reps on the bench press at his pro day after not getting invited to the NFL’s combine. His vertical jump of 29.5 inches would’ve also been a top-15 mark for linemen at the combine.

This past season, Breckyn Hager created more headlines with his off-field antics and the haircut he promised if UT won the Big 12’s title. He still served as a team captain and started 13 times. The 6-2, 242-pound Hager has experience as both a linebacker and defensive end. He led UT in sacks during the 2016 and 2017 seasons. Hager’s older brother, Bryce, just concluded his fourth season in the NFL.

A team captain in 2018, Wheeler ranked second among the Longhorns with his 87 tackles. He led Texas in that statistic during the 2016 season. In total, the 6-3, 235-pound Wheeler started 29 times during his collegiate career and amassed 235 tackles and seven sacks. When asked last month what he’d bring to an NFL roster, Wheeler said he would be a good fit with any team’s culture.

Congratulations to Captain Elijah Rodriguez on EARNING an opportunity with the New Orleans @Saints.

EVERY time the Longhorns snapped the football this past season, Elijah was in the game – playing three different positions while starting games at both RG and Center.#HookEm 🤘🏼 pic.twitter.com/7XCaTnZxRF

Elijah Rodriguez was a team captain and unsung asset on UT’s offensive line this past season. In addition to starting 10 times at right guard, Rodriguez was a four-time starter at center and he logged a few snaps at left guard. The 6-5, 305-pound Rodriguez was set to be Texas’ right tackle in 2017 before an ankle injury cost him most of the season, but he did start at left tackle in the Texas Bowl.

We have agreed to terms with S P.J. Locke.

Locke started in 31 of the 47 games he played with the Longhorns and one of his three career interceptions was recorded in the Sugar Bowl. The 5-11, 210-pound Locke was used as both a nickelback and safety this past season. Said Locke after his pro day: “I’m saying I’m a safety that covers like a corner and hits like a linebacker. That’s what I tell them. Wherever you want to play me, that’s where you play me.”