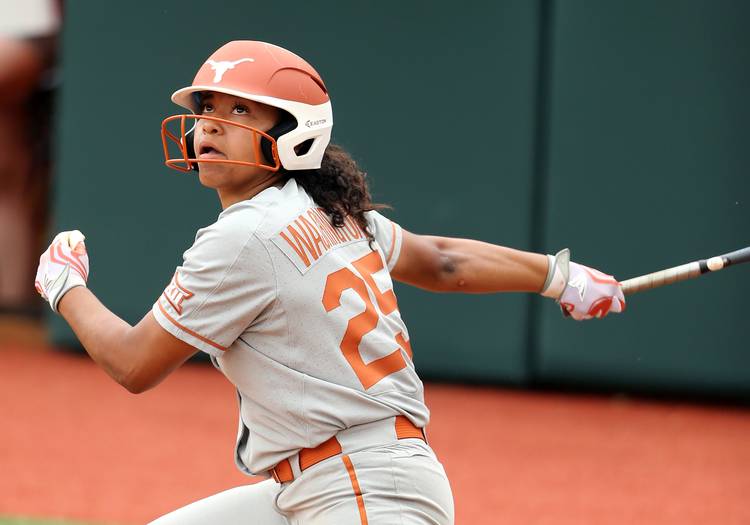 A four-run third inning helped the Texas softball team beat Kansas 4-2 Sunday and wrap up a sweep of their three-game series in Lawrence, Kan.

UT got all the runs it needed after Ki’Audra Hayter beat out an infield single with one out in the third and advanced to second on a throwing error. Janae Jefferson blooped a double into left field to score Hayter. After another out, Lauren Burke’s RBI single up the middle made it 2-0. Mary Iakopo reached on an infield hit, and Kaitlyn Washington capped the rally with a two-run single to left-center.

Meanwhile, Miranda Elish was holding the Kansas bats in check. She pitched six shutout innings before giving up a pair of runs in the bottom of the seventh. Madison Sykes led off with a double off the center field wall and scored on Miranda Rodriguez’s single. Singles by Jennifer Marwitz and Sydnee Ramsey closed the gap to 4-2, but with runners at the corners and two outs, Elish got Brittany Jackson to bounce back to her to end the game.

Elish struck out eight, walked none and scattered nine hits to improve her record to 13-8.

Burke and Washington both went 2-for-3 to lead the Texas offense.

Marwitz was 2-for-3 and Ramsey was 2-for-4 for the Jayhawks.

Next up for the Longhorns is a home game at 6 p.m. Wednesday against Incarnate Word. Baylor will visit McCombs Field for Saturday night and Sunday afternoon games next weekend.