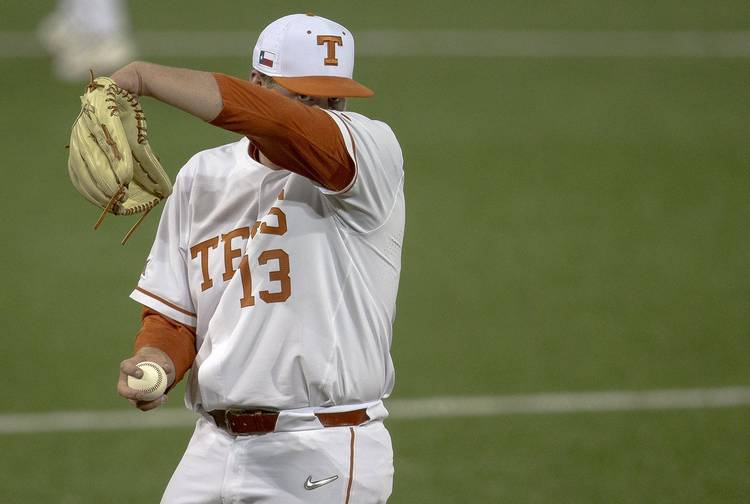 Texas pitcher Bryce Elder wipes during a game against West Virginia on April 26, 2019 in Austin. [Nick Wagner/Austin American-Statesman via AP]

Needing a win to keep Kansas at the bottom of the Big 12 standings, the Longhorns baseball team fell to the Jayhawks 4-2 in Lawrence on Friday night.

A three-run ninth inning, fueled by a pair of home runs, doomed a Longhorns squad that has lost 10 of its last 13 games.

Casey Burnham hit a two-run shot to end the game after Brett Vosik tied it with a solo homer to start the inning.

Texas twice held a slim lead, but both times the Jayhawks managed to tie the game.

Duke Ellis drove in the first run of the game on a single to left field. Lance Ford scored the run in the third inning.

Kansas got an RBI single from James Cosentino to tie the game in the sixth. Burnham scored on the play.

Bryce Elder turned in a good start to do his part in setting the Longhorns up for a win. He allowed one run on just three hits in 7 1/3 innings. He struck out five and walked four.

Ryan Zeferjahn did just as well, if not better, for the Jayhawks, giving up one run on two hits while striking out 10 in 6 2/3 innings.

Ford put the Longhorns ahead once more in the ninth when he hit a two-out single to score Kamron Fields.

The Longhorns baseball squad will try to regroup and face Kansas at 2 p.m. Saturday.