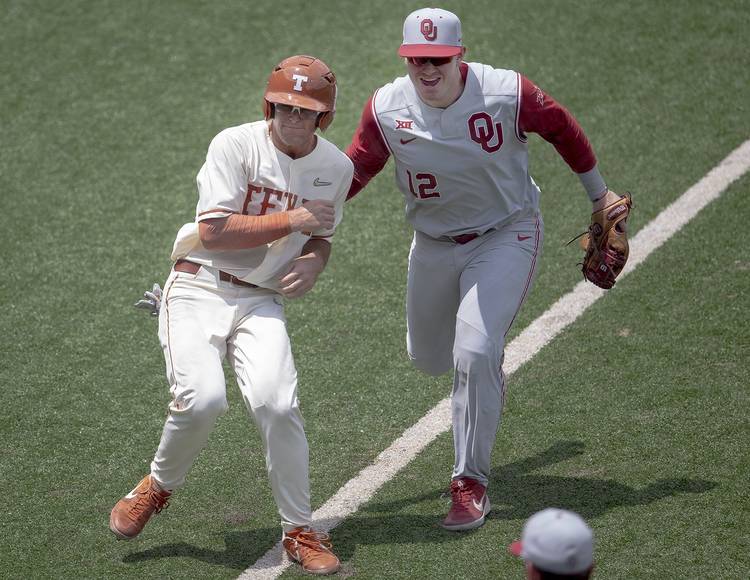 Oklahoma infielder Brylie Ware (12) tags out Texas' Lance Ford (28) during a college baseball game on May 17, 2019 in Austin. [NICK WAGNER/AMERICAN-STATESMAN]

With its most lopsided loss in the history of the Red River Rivalry, Texas essentially had its 2019 baseball season ended on Friday afternoon.

Texas dropped to 6-16 in Big 12 play with the loss, and the Longhorns guaranteed themselves a ninth-place finish in the conference’s standings. Only eight teams get invited to the Big 12 tournament. That competition gets underway in Oklahoma City this upcoming Wednesday. Last year, Texas won the Big 12’s regular season title and eventually reached the College World Series.

Despite Texas’ desperate need of a win at UFCU Disch-Falk Field, the opener of Friday’s doubleheader was never close as Oklahoma scored in each of the first five innings. Ranked last in the Big 12 in homers, the Sooners went deep three times as they built a 10-0 lead. Oklahoma’s fourth homer — a two-run blast by Brady Lindsly in the seventh session — put Oklahoma up by 12 runs and a run rule was called after UT’s at-bat in the inning.

On Friday, San Jacinto College infielder Camryn Williams announced that he will join the Longhorns in 2020. This season, Williams is hitting .341 and slugging .588 over 182 at-bats with the Gators. He has clubbed eight homers and is 12-for-20 on his attempted steals.

Williams will be a junior during the 2020 season. A native of Odessa, Fla., Williams spent the 2017 season at Dallas Baptist.

NOTABLE NUMBER: 8. Eric Kennedy led off the first inning with his eighth bunt single of the season. Kennedy went 1-for-2 against the Sooners and finished the game with a .311 batting average. With one game left in UT’s season, Kennedy has a 42-point lead over Ryan Reynolds for the Texas batting title. He will become the first freshman to lead the Longhorns in batting since Erich Weiss in 2011.

UP NEXT: Texas (26-27) and Oklahoma (33-20; 11-12 Big 12) will return to UFCU Disch-Falk Field at 6:30 p.m. on Friday evening for the conclusion of this year’s Red River Rivalry series. UT will honor seniors Matteo Bocchi, Masen Hibbeler, Brandon Ivey, Michael McCann and Tate Shaw before the game. Junior pitcher Donny Diaz will also participate in the “Senior Day” festivities.