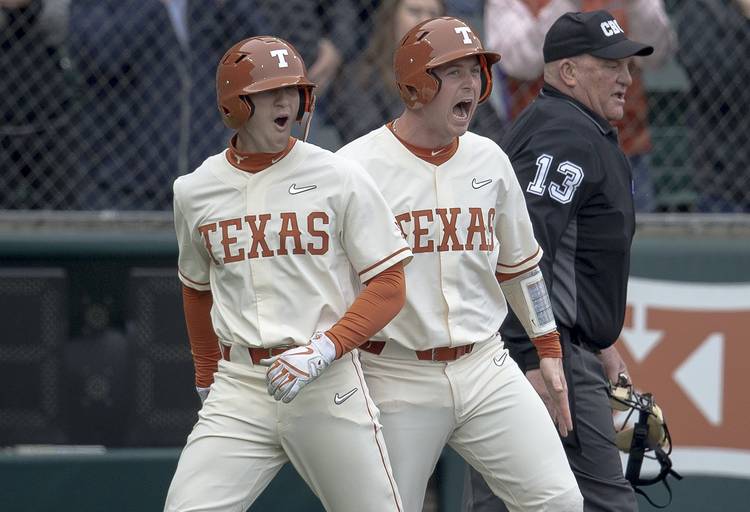 Already eliminated from postseason contention, Texas bested Oklahoma on Friday night and closed out its season on a high note.

Losers of 4-2 and 13-0 decisions this week, Texas earned its first lead of this year’s Red River Rivalry series during a two-run first inning. Masen Hibbeler and Ryan Reynolds homered over the next two innings as Texas built a 5-0 advantage. Oklahoma (33-21; 11-13 Big 12) owned a 4-1 edge on the scoreboard the rest of the way, but the UT’s lead never slipped under two runs.

After collecting four of UT’s 12 hits over the series’ first two games, Duke Ellis led the Texas in the finale with a 4-for-4 performance. Ellis also stole two bases and was 17-for-17 on his attempts this year.

Hibbeler was one of the five seniors that Texas honored ahead of the regular season finale. A shortstop, Hibbeler then started alongside fellow seniors Michael McCann and Tate Shaw. Like Hibbeler, McCann also scored a run on Friday night.

Senior pitchers Matteo Bocchi and Brandon Ivey did not pitch in the win. Both players worked earlier in the series.

Junior Donny Diaz also participated in “Senior Day” activities. Diaz has been in college since he enrolled at San Jacinto Junior College in 2015, but he missed most of the 2016 and 2018 seasons with injuries. Texas coach David Pierce said that Diaz has graduated and would have had to appeal to the NCAA in order to receive a sixth year of eligibility.

NOTABLE NUMBER: 3. This season, Texas only had a starting pitcher last five innings in three of the 12 times it closed out a three- or four-game series. By comparison, Texas sophomore Bryce Elder went five innings in 12 of his 13 starts in 2019. Blair Henley did it in 84.6 percent of his 13 starts. On Friday night, freshman Ty Madden struck out four but control issues cut short his start with two outs in the fourth inning.

UP NEXT: Since Texas is done playing baseball, the MLB Draft is likely the next important date on fans’ calendar. The draft will be held from June 3-5.