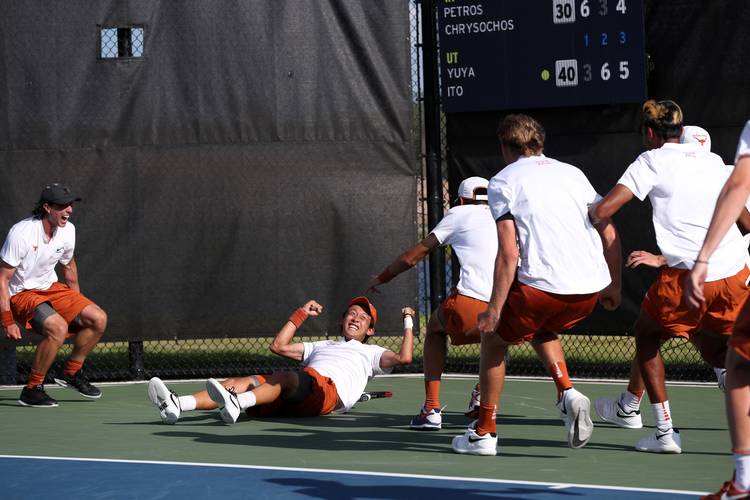 The Texas men’s tennis team authored one of the most dramatic stories in college athletics this season. All the Longhorns needed was a spectacular finish.

Players formed a dog pile on the UCF courts in Orlando, Fla., and school officials will soon light the UT Tower for a magnificent win to cap a wild season few would’ve dreamed possible.

“I don’t know how to describe it. It’s just amazing,” Ito said. “I can’t really say anything right now. National champions was our goal, our biggest goal this year. We’ve had some ups and downs but glad we got through.”

No. 2 Texas, which has a deep NCAA postseason experience, had not played for the NCAA title since 2008. But this was a season unlike any other. Coach Michael Center was arrested in March for his role in the college admissions scandal. Center was accused of accepting a $100,000 bribe for helping a California student gain acceptance to UT under false pretenses.

By season’s end, he had pled guilty in a federal courtroom while interim coach Bruce Berque took over at the Texas Tennis Center.

Without Center, the Longhorns kept on marching — reaching No. 1 in the ITA rankings for the first time in school history, winning the Big 12 title and storming through the postseason to reach the NCAA final.

It’s unclear whether Berque will become the team’s permanent head coach going forward. Winning the program’s first national title is likely to have an impact on Texas athletic director Chris Del Conte, though. Del Conte flew to Orlando after Texas won the semifinals against Florida.

“I think it means a lot to the University of Texas and especially to the fans there, who came out to support us and all the alumni,” Berque said. “This team, we’ve got five years and they’ve done an unbelievable job of leading this team the last few months. I couldn’t be prouder.”

Ito and Chih Chi Huang had a relatively easy time winning their doubles match 6-2. Wake Forest got the upper hand in the other two doubles matches. But UT’s Colin Markes and Leonard Telles lost 6-3, and then Christian Sigsgaard and Harrison Scott fell 6-4.

The Demon Deacons’ real strength was in singles competition, which made for an uphill climb for the Horns. Wake Forest had three singles players ranked among the top 50 in the ITA men’s rankings. Texas had two in the top 55, by comparison.