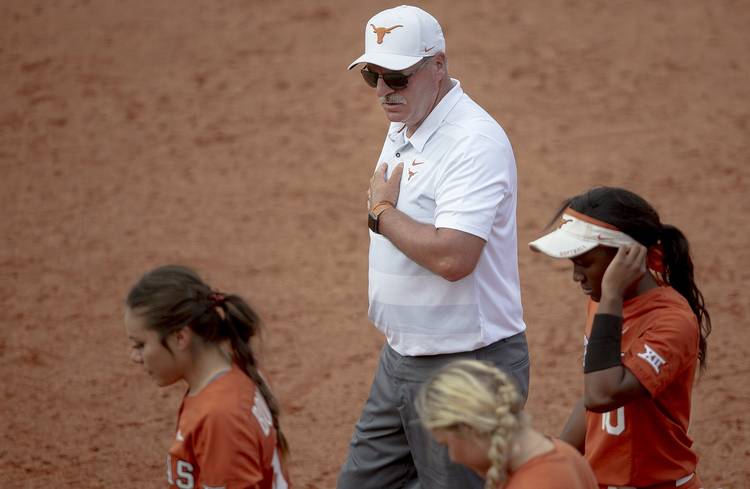 TUSCALOOSA, Ala. — Thanks to a big swing and a solid pitching performance on Thursday night, Alabama has backed Texas’ softball season into a corner.

Both teams went without a baserunner over the evening’s first two innings, but Merris Schroder broke a scoreless tie with a two-run homer in the third frame. Alabama later scored its final run on a fourth-inning error by Texas. UT reliever Brooke Bolinger held Alabama scoreless over her two-inning appearance, but the Crimson Tide didn’t need any additional offense.

Alabama freshman Montana Fouts gave up three hits and no walks to Texas. A right-hander, Fouts struck out five batters and allowed only two Longhorns to reach second base.

Alabama (56-7) and Texas (45-16) will return to Rhoads Stadium on Friday for the second showdown in this super regional. If necessary, a third game will be played on Saturday afternoon. Texas must beat Alabama twice in order to advance to the Women’s College World Series.

T3 | Texas has its first base runner as Alabama native @mk22tedder reaches on an error at short! One down…

MK Tedder’s high school is located less than 60 miles away from Rhoads Stadium and the sophomore outfielder grew up as an Alabama fan. In her homecoming, Tedder reached base on a third-inning error and flew out to right field. Tedder started in right field but did not get a chance to record any outs.

NOTABLE NUMBER: 1. Thursday’s loss was UT’s first-ever in an opener of a super regional. A fifth-time participant in the NCAA’s super regional, Texas had opened its previous appearances with 1-0 (Bethune-Cookman in 2005), 1-0 (Washington in 2006), 4-2 (Oregon in 2012) and 3-2 (Florida State in 2013) wins. Texas swept through three of those aforementioned series but dropped its 2012 battle with an Oregon team that was led by current UT coach Mike White.

UP NEXT: The first pitch of this super regional’s second game is set for 8 p.m. on Friday night. ESPN will televise the fifth-ever postseason meeting between Texas and Alabama.