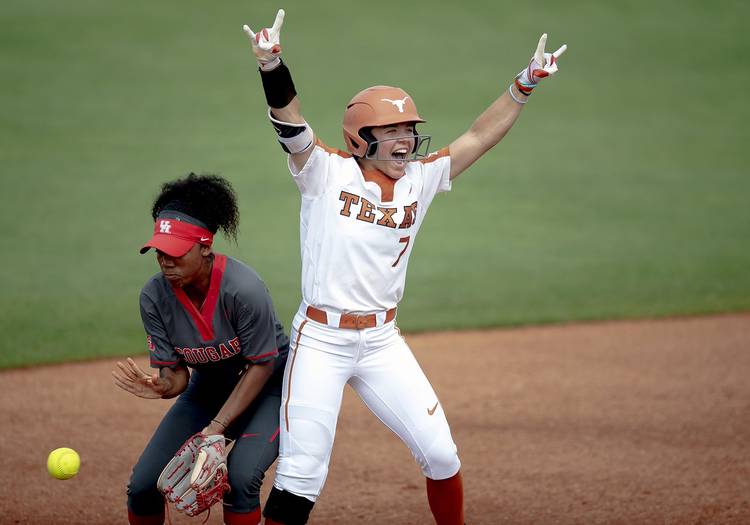 Texas junior Reagan Hathaway (7) celebrates a double against Houston on May 19, 2019 in Austin. [NICK WAGNER/AMERICAN-STATESMAN]

This past Saturday, Texas’ 2019 softball season ended with an 8-5 loss to Alabama.

The 2019 season was UT’s first with Mike White as its head coach. The 46 wins earned by Texas were the program’s most since 2013, which was also the last season that the Longhorns reached the super regionals.

A few fans at McCombs Field may also remember this season for statistical reasons. During the spring, UT reset a handful of its own records.

With a 10-1 win at Kansas on April 27, Texas bested its record for routs in a season. In 2011 and 2014, Texas run-ruled 14 opponents. The most-notable of these conquests was recorded in an 11-0 win on March 22 when Miranda Elish no-hit Iowa State and then hit a grand slam in the bottom of the fifth inning to put the run rule into effect.

The UT bullpen recorded nine saves, which bested the eight saves it had in 2002 and 2018.  Brooke Bolinger was responsible for four of those saves, but Elish (three), Shea O’Leary (one) and Ariana Adams (one) also got in on the action.

In her first year on campus, O’Leary allowed nine earned runs over 97 2/3 innings. That bested the standard set in 2003 by Amy Bradford (10 earned runs over 82 1/3 innings). While not a school record, the freshman right-hander’s 0.65 ERA will likely lead the NCAA this season.

Had Texas extended its season and reached the Women’s College World Series, a few more of UT’s records may have fallen. Hathaway, an outfielder who missed much of the last two years with a knee injury, fell two starts shy of tying Keely Franks and Jane Teixeira’s 1998 record of 65 starts in a single season. Janae Jefferson finished her sophomore year with 80 hits and needed only four more hits to oust Lindsay Gardner as Texas’ single-season hits leader. Bradford, Erica Wright and Christa Williams would have had to share their school record with Bolinger had the senior picked up one more save.