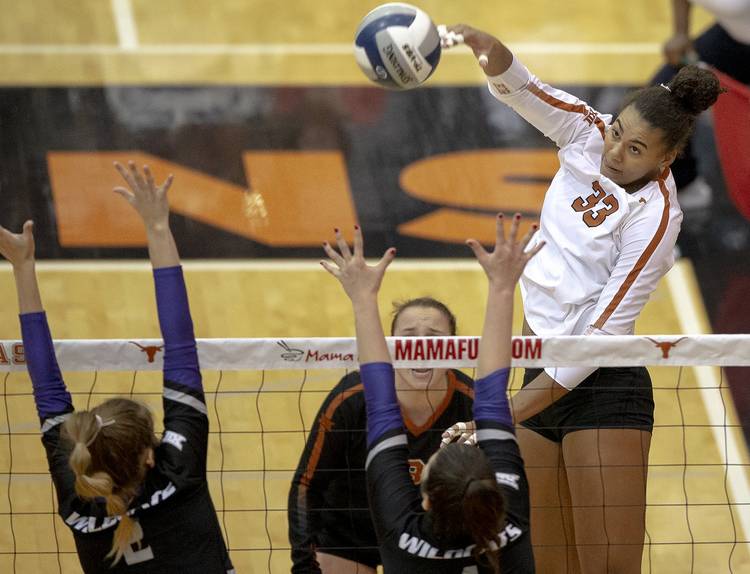 Texas outside hitter Logan Eggleston (33) spikes the ball against Kansas State as teammate Sydney Petersen looks on in Austin on Nov. 7, 2018. [NICK WAGNER/AMERICAN-STATESMAN]

A quartet of Longhorns will participate with the 2019 U.S. Women’s Junior National Training Team.

Sophomores Logan Eggleston and Sydney Petersen will be joined by incoming freshmen Skylar Fields and Molly Phillips and 16 other players in Colorado Springs, Colo., from July 6-12. Those players will be competing for the 12 spots on the U.S. Women’s Junior National Team.

Eggleston is listed among the training team’s six outside hitters, Phillips is one of the five middle blockers and Fields will attempt to stand out in a crowd of three opposite hitters. Petersen, Oregon’s Brooke Nuneviller and Maryland’s Allegra Rivas are the three liberos who will be in Colorado Springs.

The U.S. Women’s Junior National Team will compete in the 2019 FIVB Women’s U20 World Championship from July 12-21. That competition will be held in Mexico. Longtime Texas coach Jerritt Elliott will lead the junior national team.

Eggleston, who won a gold medal with the junior national team at last year’s NORCECA Continental Championship, was named the Big 12’s top freshman in 2018. Last season, Petersen averaged 3.58 digs per game as UT’s libero. Fields and Phillips, who started alongside Eggleston at the NORCECA Continental Championship, were the two signees in Texas’ 2019 recruiting class.