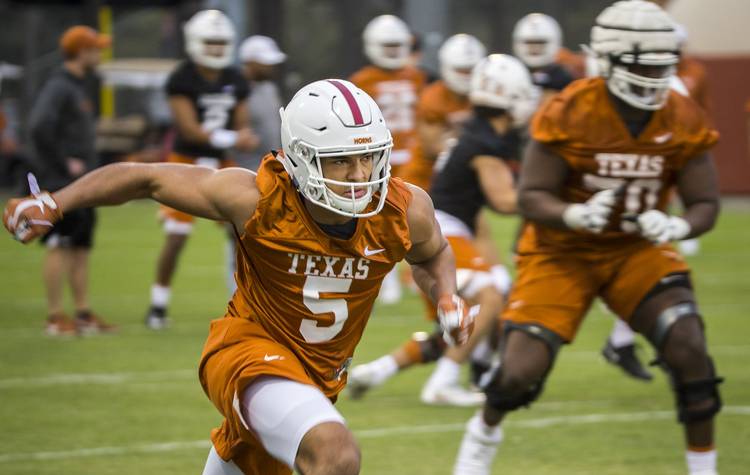 Five-star receiver Bru McCoy made his decision to leave Texas official on Friday.

It had been widely reported that McCoy was entering the NCAA’s transfer portal for the second time this year. In a statement published by 247Sports reporter Greg Biggins, McCoy confirmed that he is now an ex-Longhorn. In his statement, McCoy expressed respect for Texas coach Tom Herman and said that “I did not expect this turn of events, but am confident this is the best decision for me and my family.”

It is believed that McCoy will transfer to USC.

BREAKING: #Texas WR Bru McCoy just informed the Longhorns coaching staff moments ago he plans to transfer out of Austin and will enter the transfer portal, McCoy's statement below pic.twitter.com/dK7a3aJaYw

McCoy originally signed with USC but entered the transfer porter after offensive coordinator Kliff Kingsbury was hired to coach the Arizona Cardinals. McCoy spent this past semester at Texas and caught three footballs in the school’s spring game.

The 6-3, 215-pound McCoy was considered a candidate to receive playing time as a freshman. As it did successfully with back-up quarterback Casey Thompson earlier this year, Texas did its best to keep McCoy from transferring. Earlier this week, Herman and quarterback Sam Ehlinger were among those who traveled to Los Angeles to talk to the receiver.

In the end, McCoy still decided to leave the Longhorns. In its receiving corps, Texas still has established starters in Collin Johnson and Devin Duvernay. UT does need to find a replacement for Lil’Jordan Humphrey at “H” receiver. Returnees Joshua Moore and Jordan Pouncey could battle for reps at that position alongside incoming freshman Jake Smith.

With Bru McCoy announcing his transfer from #Texas, he becomes the third member of the #Longhorns 2019 recruiting class to be lost for (at least) the season. WR McCoy (transfer), LB DeGabriel Floyd (spinal stenosis) and RB Derrian Brown (undisclosed medical emergency).