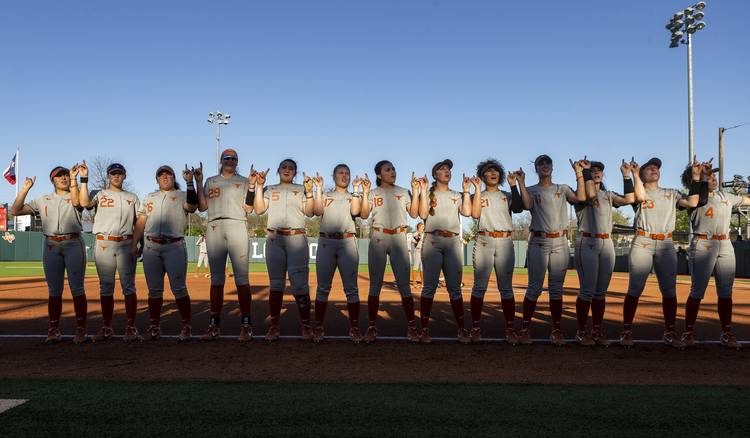 With no other options available, Texas needed sophomore Mary Iakopo to catch every pitch that was thrown over the last 38 games of its 2019 softball season. Help is on the way, though.

Colleen Sullivan announced on Monday that she will transfer to Texas. Sullivan spent her freshman year at UCLA where she earned a spot on the Pac-12’s all-freshman team. Used as a catcher, first baseman and designated player, Sullivan hit .239 with five home runs.

The last of Sullivan’s 32 starts with UCLA was made in a 5-4 win over Oklahoma on June 4, which secured a national title for the Bruins. Texas now has five players on its roster — Sullivan, Iakopo, Lauren Burke, Miranda Elish and Shannon Rhodes — who have appeared with another team in the Women’s College World Series. UT last reached the NCAA’s biggest stage in 2013.

Before anything, I want to thank my UCLA teammates, families, and supporters for a truly outstanding season. To all my girls, the memories we cultivated and our experiences together can never be recreated. I have so much love in my heart for each of you. I am so thankful to the Bruin bubble for giving me the opportunity to be apart of such a memorable year. I have nothing but love respect, and gratitude for the 2019 team, and the incredible support from our families, alumni, and fans. Being a Bruin will always be a proud part of my story. – – That being said, I am very excited to announce that I have decided to continue my academic and athletic career at the University of Texas at Austin. I cannot thank my incredible family and friends enough for being so extensively supportive through this whole process. I truly believe I have found my home and could not be more thankful for this amazing opportunity! HOOK’EM HORNS 🤘🏻🧡

With the arrival of Sullivan, Texas now has four catchers in its dugout.  UT only carried two catchers on last season’s roster, and Iakopo couldn’t rest much after junior Taylor Ellsworth suffered a season-ending hand injury during the campaign’s first day. Iakopo caught over 8,200 pitches and was the only catcher used by Texas in the 38 games after Burke started as an emergency option against Texas Southern on March 8.

In 2019, Iakopo was an all-Big 12 honoree who led the Longhorns with her 11 homers. Ellsworth earned that same designation in 2017. Texas also signed Humble Atascocita catcher London Marder during the 2019 recruiting cycle.

Defensively, Sullivan could also be an option at the first base position.  Burke and Kaitlyn Washington made the bulk of the starts at first base for Texas in 2019. If Sullivan took over on that corner of the infielder, Burke and Washington could then compete for playing time in a crowded outfield this upcoming spring.