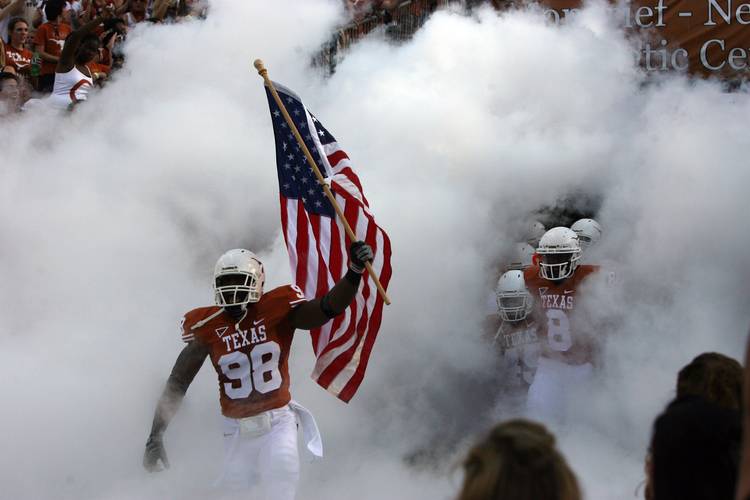 UT's Brian Orakpo (98) carries the US. Flag as Texas takes the field ahead of a game against Rice on Sept. 20, 2008. (Larry Kolvoord/American-Statesman)

It didn’t take long for three recently-retired Longhorns to get their call to the hall.

Brian Orakpo, Brian Robison and Derrick Johnson will all be inducted into the Texas Athletics Hall of Honor, the school announced on Thursday. The Hall of Honor’s Class of 2019 will feature 14 names. The induction banquet is scheduled for 6 p.m. on Aug. 30 at the AT&T Hotel and Conference Center.

Orakpo, Robison and Johnson all announced their retirements from the NFL this off-season. Orakpo and Robison both played on UT’s 2005 national championship team, and Robison’s induction also recognizes his work with the school’s track and field program. Johnson was a star linebacker from 2001-04 and he is one of five Longhorns to record 400 tackles in a career.

Additionally, the football program will send Bryant Westbrook and Ragan Gennusa into the Hall of Honor.

Four-time All-American tennis player Sandy (Sureephong) Blanton will also be inducted alongside champion swimmer Patty (Sabo) Karsten and track and field standouts Marshevet (Hooker) Flintall and Denise LaKeisha Backus. Danielle Viglione, whose 293 three-pointers from 1993-97 are still a school record, and Seth Johnston, an infielder who won College World Series titles in 2002 and 2005, will be enshrined next month. Former university administrator Don Evans will also be recognized as a special selection.

Among the Hall of Honor’s notable newcomers will be Nancy (Hager) Hale and Andre Robertson. A golfer who won five tournaments in the spring of her senior year, Hale was the first woman to receive an athletic scholarship from Texas. Robertson was the first black player to be awarded a scholarship from the Longhorns’ baseball program.

Robertson spent three seasons in UT’s infield before Toronto took him in the fourth round of the 1979 MLB Draft. Coming out of West Orange Stark High, Robertson actually wanted to play football at Texas. The 155-pound quarterback, however, changed his mind after he saw Earl Campbell working out during his recruiting trip.

“This guy’s thigh is bigger than my waist,” Robertson told the American-Statesman in 2018. “I chose baseball. I think that was the best move I could have made.”