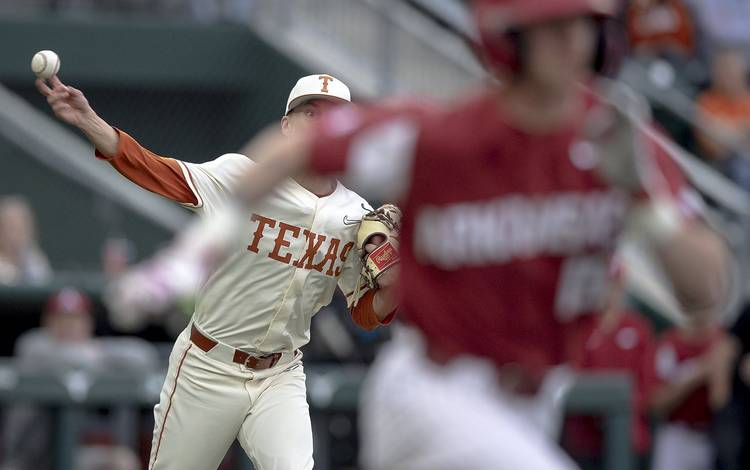 Texas pitcher Kolby Kubichek (39) throws the ball to first base for an out against Arkansas on March 20, 2019 in Austin. [NICK WAGNER/AMERICAN-STATESMAN]

This summer, Texas has sent a handful of its players to participate in various collegiate wood bat leagues across the country. Rising sophomores Kolby Kubichek and Dawson Merryman are pitching for the Chatham Anglers, and both players will participate in the Cape Cod League’s all-star game this weekend. Kubichek appeared in 14 games during his freshman year at Texas while Merryman spent the past year at Midland College.

Any momentum gained by Kubichek, Merryman and Cole Quintanilla, who was invited to the California League’s prospects game, could be a benefit for UT’s pitching staff. Texas will retain all-conference ace Bryce Elder in 2020, but two of the spots in its weekend rotation are up for grabs. The ERA posted by Texas in 2019 was its second-worst of the millennium. That 4.37 ERA ranked seventh in the Big 12 and 88th nationally.

Kolby Kubichek (@TexasBaseball) is an All-Star. The right-hander replaces Parker Scott on the East Division squad.