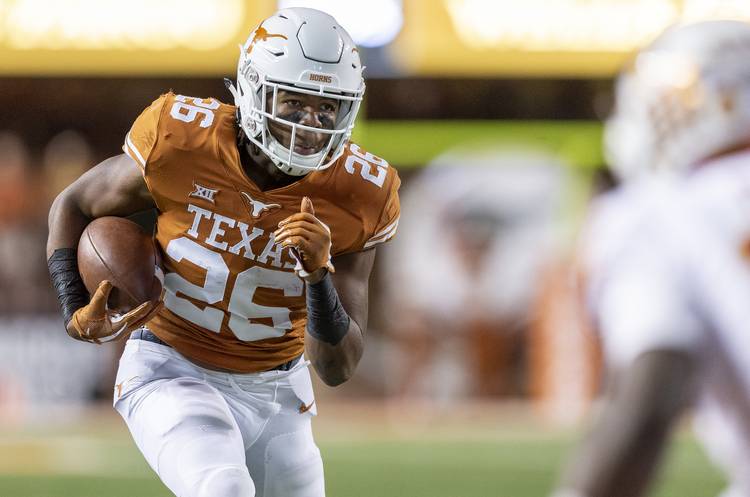 Texas running back Keaontay Ingram (26) scores a touchdown against Iowa State at Royal-Memorial Stadium on Nov. 17, 2018. [Stephen Spillman for Statesman]

This season, eyes will be on Texas’ backfield as sophomore Keaontay Ingram attempts to place himself in the company of Ricky Williams, Cedric Benson and D’Onta Foreman.

Ingram has been placed on the preseason watch list for the Doak Walker Award, which annually honors the top running back in college football. Ingram was one of 72 names on a watch list that was released on Wednesday. Also among the watched is Wisconsin junior Jonathan Taylor, who won the award in 2018.

Read more: Sam Ehlinger may be the star, but Tom Herman eager to spread it around offensively

Last season, Ingram split carries as UT ranked 90th among FBS schools with its 153.1 rushing yards per game. Ingram appeared in 13 games and averaged five yards over his 142 carries. Ingram ran for three touchdowns and also scored on two of his 27 catches. In a 23-17 win over Baylor, Ingram ran for 110 yards on 19 carries.

On Tuesday, UT quarterback Sam Ehlinger told reporters at the Big 12 media days that “I’m extremely excited about (running back) Keaontay Ingram. When you’re a true freshman it’s hard to fill your full potential. In the spring, he was killing it. I think he’s going to have a good year.”

Texas is a four-time winner of the Doak Walker Award, which was first handed out to Washington’s Greg Lewis in 1990. Williams earned the distinction in 1997 and 1998, Benson won his prize in 2004 and Foreman was honored in 2016. The only other school that can boast more than two Doak Walker trophies is Wisconsin, which tied Texas on the overall scoreboard in 2018.