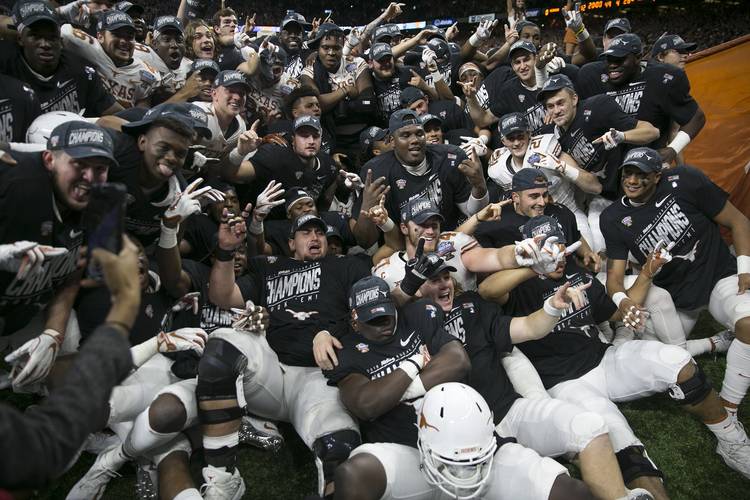 One of the linebacker’s rings was earned this past spring when he graduated with a degree in sports management and a minor in business. While eyeing McCulloch’s jewelry, teammate Malcolm Roach stated that “I’m trying to get that ring right there.” McCulloch himself said that his graduation ring was the ring he’s the most proud of, although it should be pointed out that his T-Ring hasn’t come in yet.

The other ring on McCulloch’s right hand was also worth a look. At AT&T Stadium to participate in the Big 12’s Champions for Life event, McCulloch showed off the bling that celebrates UT’s 28-21 win over Georgia in January’s Sugar Bowl. Last week, Texas handed out the rings to players, coaches and support staff.

According to a Texas spokesperson, Uptown Diamond Jewelry produced the ring. A committee consisting of UT coach Tom Herman, team captains and members of last year’s leadership council provided input on the design. Each of the rings cost $325.

What’s on the rings? Each player’s name and number was engraved on the left side of the ring, which also features the state of Texas and the Sugar Bowl logo. The score of the Sugar Bowl joins the UT tower on the ring’s right side. The program’s “1-0” mantra was placed on the bottom. The top of the ring features a Longhorn logo and a custom-cut honeycomb stone. The rings’ white diamonds are made of cubic zirconia.

“We were able to pick and choose what we want on the rings and stuff, so it was super exciting,” Texas safety Brandon Jones said. “It’s an awesome, fat and huge ring, so I like it. I ain’t had one of those in a while, so it’s nice.”

Don’t expect the Sugar Bowl rings to become a regular accessory in many of the Longhorns’ wardrobes, though. Of the six players who accompanied Herman to Arlington, only McCulloch wore his ring.

“I love the ring, but that’s last year’s team. This year, we’re focused on this year, 2019,” said Roach, a senior defensive lineman. “I don’t have no problem with them wearing them, but that’s just the mindset I have. I only wore my Texas Bowl ring one time. I like to get my rings and just put them up in my room.”

Said senior center Zach Shackelford: “I’m going to have it in my trophy case or whatever forever. It’s such a good feeling but at the same time, we’re ready for next year. I’m going to show it to my grandkids one day.”