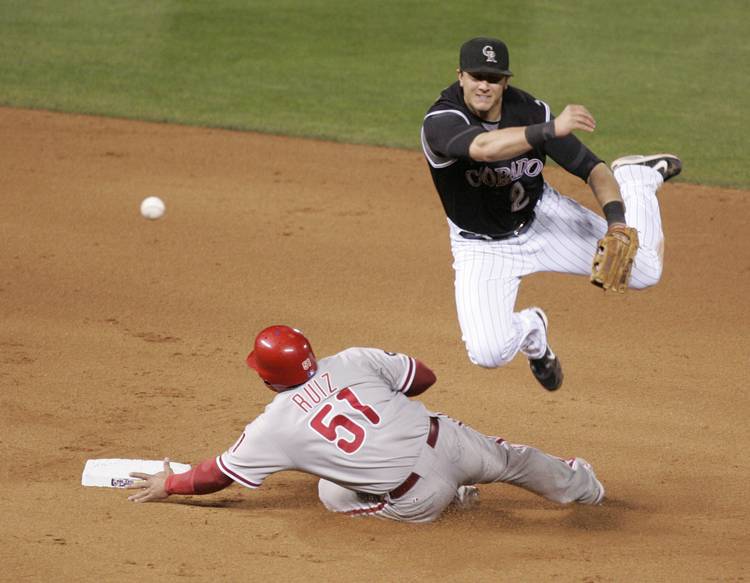 Colorado shortstop Troy Tulowitzki (right) completes a double play after forcing Philadelphia's Carlos Ruiz out at second base during a playoff game at Coors Field in Denver on Oct. 6, 2007. (AP Photo/Will Powers)

Former all-star shortstop Troy Tulowitzki will join the Texas baseball team as a volunteer coach, the school announced on Thursday.

Tulowitzki will fill the vacancy that was created on David Pierce’s coaching staff when Phil Haig departed following a three-year stint in Austin. Haig tutored pitchers, however, so some re-shuffling of duties will be needed. Assistant coach Sean Allen will shift from coaching hitters to pitchers while retaining his role as UT’s recruiting coordinator (Allen was once the pitching coach at Florida International).

This will be the first coaching job for the 34-year-old Tulowitzki, who opened this baseball season as a starter for the New York Yankees. However, the oft-injured Tulowitzki was sidelined for much of this season by an ailing calf. He announced his retirement on Thursday afternoon.

In a statement released by Texas, Pierce said that “Tulo and I had an opportunity to spend some time together and I came away so impressed with his desire to teach and his excitement to become a part of Texas Baseball. Longhorn legends Huston Street and Drew Stubbs gave great endorsements on Tulo’s behalf. His knowledge goes without saying but his passion and energy for the development of young men left such a meaningful impression on me. He will be a great addition to our staff.”

In 13 seasons with Colorado, Toronto and New York, Tulowitzki hit .290 with 225 home runs and 780 RBIs. While playing with the Rockies from 2006-15, Tulowitzki won two gold gloves and was invited to five all-star games. In 2009 and 2010, he finished fifth in the voting for the National League’s MVP award.

The addition of Tulowitzki could pay immediate dividends for UT’s performances at the plate and in the infield. The Texas infield struggled defensively throughout this past spring, and the Longhorns will be breaking in a new first baseman, shortstop and third baseman in 2020. Offensively, Texas is coming off a season in which it ranked last in the Big 12 in batting average (.250), runs (287) and home runs (27).