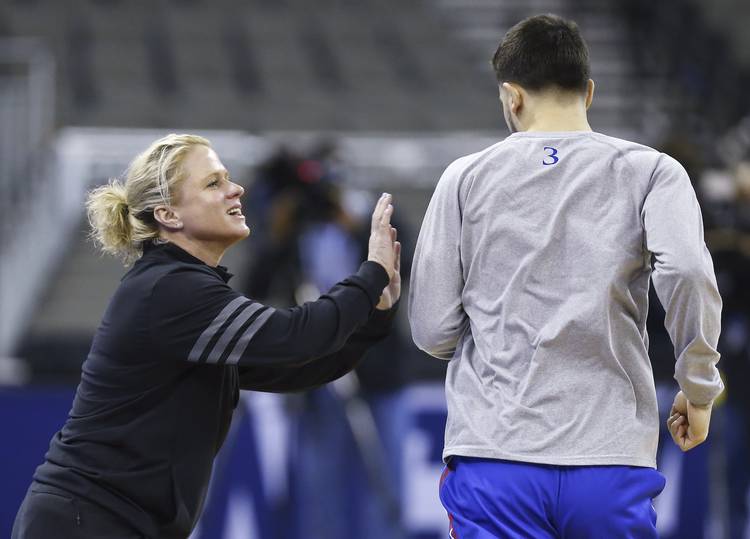 Texas announced Friday the hiring of Andrea Hudy to oversee the strength and conditioning program for both the men’s and women’s basketball programs.

Hudy spent the last 15 seasons overseeing the Kansas men’s basketball strength program. Hudy is widely credited with being a critical part of coach Bill Self’s run of 14 consecutive Big 12 titles, a string that was broken this past season.

“After speaking with Shaka, I am encouraged that I will not only be able to continue working with outstanding student-athletes, but I will also have the chance to impact the program by building strong relationships,” Hudy said in a statement.

Hudy is scheduled to start working at UT on Monday.

“When Andrea expressed an interest in joining our team, it quickly became clear that her unique skill set is ideally suited for our team’s performance needs,” UT men’s coach Shaka Smart said in a statement. “We’re looking forward to Andrea getting to work with our guys immediately!”

Women’s coach Karen Aston said Hudy has been a mentor to sports performance coach Zack Zillner, who works with the women’s team.

“Together, Texas basketball will be served by the best strength and conditioning team in the nation,” Aston said in a statement.

Typically, the hiring of a strength coach warrants small blurbs. This is different. Hudy was so critical to Kansas’ success, Jayhawks men’s coach Bill Self even issued a statement, calling the Texas job “a good opportunity for her.”

“Andrea Hudy has played a pivotal role in our success over the last 15 years,” Self said in his statement. “While I’m disappointed she is leaving, I am also excited for her, and I know our players will be as well. Bottom line is, we hate to lose her, but we understand that she has a great opportunity to grow and do something new professionally.”

Self added that he wished Hudy the best, and “we look forward to seeing her during the Big 12 season.”

In January 2013, Hudy was named the National College Strength and Conditioning Coach of the Year by her trade association, and her book Power Positions was published the following year. Hudy is also credited with helping integrate cutting-edge technology into Kansas’ workouts.

Before Kansas, Hudy spent 9 1/2 years working with the Connecticut men’s and women’s basketball programs. She was a part of eight national championship teams at UConn. During her career, Hudy has seen more than 50 basketball athletes go on to play in the NBA.