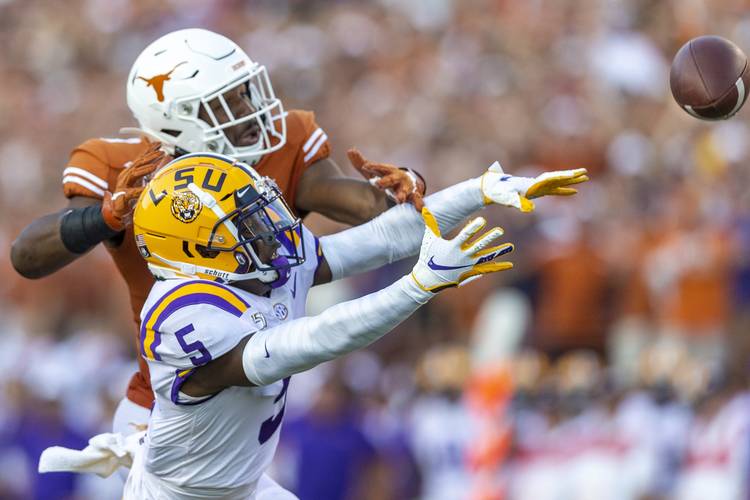 This hasn’t been a classic game as a No. 6 vs. No. 9 might expect. Texas has been erratic on offense. LSU committed what should have been a costly turnover. A couple of big gains by both sides, yes, but few electric plays. As expected, it’s been a tough matchup for both sides.

The Tigers separated themselves with two late scoring drives, a field goal and a touchdown.

It’s been two tough defenses that have tried to establish themselves with physicality. Both schools claim the title of DBU in terms of tradition and success in the secondary, and so far that’s been about a draw.

All week long, there’s been talk about the Big 12 vs. the SEC, and whether the Longhorns would be physical enough. Texas has stood toe to toe with LSU, but consider this: Texas twice chose to go for it on fourth-and-goal from inside the 2, and both times came up empty. No points.

The first time was fourth-and-goal from the 2; Keontay Ingram was wide open on a flare out of the backfield, but he couldn’t come down with Ehlinger’s awkward pass.

The second time was fourth-and-goal from the 1, and Ehlinger was stopped short on a run off the right side.

1. Attention, Central Michigan: You Chippewas are now on explosive play watch. Ehlinger’s 55-yard touchdown pass to Brennan Eagles in the second quarter was the Longhorns’ first play of 50 or more yards since 2017. Last year, the Longhorns and the Chippewas were the only two teams in the country without one.

2. Texas’ first drive had a little bit of everything — a nifty 19-yard screen pass to Ingram, a called Ehlinger run for 8 yards, a deep shot downfield to Brennan Eagles (incomplete) and a Ryan Bujcevski punt that forced LSU to start at its own 11.

Two notable things that we did not see: An Ingram carry or any sight of Devin Duvernay.

3. Duvernay, who was Ehlinger’s go-to guy last week with nine catches, has just one catch for 17 yards. He didn’t make it until 6:48 left in the half. In fact, he completed a pass before he caught one.

4. If you’re wondering whether Kobe Boyce’s first-week troubles may have led to a change at the second starting cornerback spot opposite Jalen Green, they didn’t. The sophomore got the start. He’s had his share of good and bad moments, making a nice open-field stop but also giving up a 38-yard pass that set up the Tigers’ first score.

4. How the Ehlinger vs. Burrow matchup is going:

Burrow is 16 of 21 for 220 yards, two touchdowns and an interception. He connected with Terrace Marshall for a 38-yard pass that set up LSU’s first field goal. He missed Ja’Marr Chase for a touchdown late in the half on a fade route from the 10. But he found Jefferson for the two second quarter scores.

Ehlinger is 9 of 19 for 136 yards and one touchdown. He found Eagles for a 28-yarder in the first quarter. But he’s been stopped short of the goal line three times from inside the 4-yard line. He also missed Jake Smith over the middle for what could have been a 20-yard gain. But he made up for that with a nice 55-yard touchdown pass to Eagles.

5. Texas has flashed its eight-defensive back Cowboy package twice, both to great results. The first was an interception, the second forced a punt.

Roschon Johnson entered the game on Texas’ fourth drive. He’s leading the team in rushing, but with only 13 yards.

Stats that matter: The Longhorns have rushed for only 29 yards. … The Tigers lead in total offense, 298-173, and also have held the ball for about 4 more minutes. … Texas is 0-for-2 on fourth-down conversions and just 2-of-7 on third downs. … LSU’s Jefferson has six catches for 83 yards and 2 TDs.

What to watch for in the second half: Will Texas gain any traction in the running game? The Tigers have won the battle of the trenches when Texas has had the ball. Ingram averaged 7 yards per carry last week and is at 3.3 tonight. … Will Ehlinger, who broke Vince Young’s school record for quarterbacks with 16 rushing scores, has yet to record one this season.

LSU, which won the opening toss, will get the ball to start the third quarter.