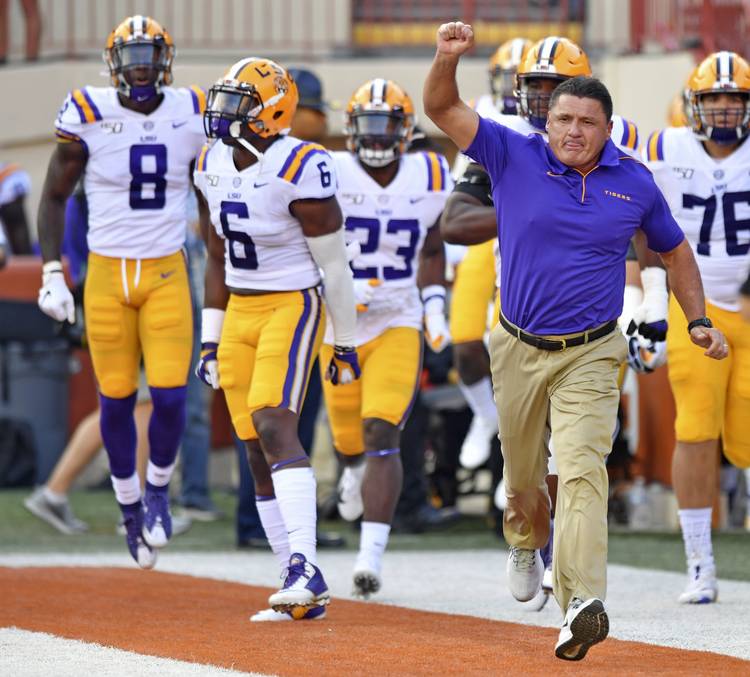 LSU coach Ed Orgeron takes the field with his players for an NCAA college football game against Texas on Saturday, Sept. 7, 2019, in Austin, Texas. (Hilary Scheinuk/The Advocate via AP)

The stadium was built in 1924, but the air conditioner in the visiting locker room has never been an issue. Until Saturday.

“First of all, I called Louisiana Tech, and they told us about it,” Orgeron said at his weekly press conference. “So we did some things in the dressing room that were better. It wasn’t great, but it was better.

“At least we had air in there,” Orgeron added. “They didn’t have air. We had some blowers in there. I don’t think that caused as much going out there having to play 93 plays on defense. I think that had a lot to do with it.”

Official statement from @_delconte on the visitor locker room. pic.twitter.com/zSdZcfSfSO

The Baton Rouge Advocate counted six different LSU defensive players who went down at some point with injury issues. No LSU offensive players and no Texas players had any apparent cramping issues despite the hot weather.

The crowd of 98,763 booed when they thought LSU players were sitting down specifically to stall UT’s momentum. Four different players went down five times with apparent cramps on the Horns’ 19-play touchdown drive in the third quarter.

“The comment today about lack of air conditioning in our visiting locker room is the first we’ve heard of any issues in that area,” Texas athletic director Chris Del Conte said in a statement. “We provide one of the best visitor setups available and are proud of the efforts we put forth in hosting our guests.

“Our facilities staff did not receive any complaints from either Louisiana Tech or LSU, and we’ve confirmed that our air conditioning in the visiting locker room is in good working order,” Del Conte added.

Reached for further comment, Del Conte said the statement would be his only comment about the A/C issue.

“Our medical staff only had to jog on the field one time,” Texas coach Tom Herman said Monday, “and that was the last play of the game on the onside kick when Josh Thompson got blindsided in his ribs.”

Herman praised his strength coach Yancy McKnight for having the Horns in good shape and properly hydrated.

Also Monday, Del Conte said the school will look a safety issues regarding the student entrance gates at Royal-Memorial Stadium. On Saturday hours before kickoff, thousands of students rushed in, pushing past bag check and security staffers just to get a good seat.

“Our fans’ safety is paramount to us, and we appreciate those who reached out and certainly hear your concerns,” Del Conte said in a statement. “We are working through plans and will address the issues and improve as we prepare for our next home game against Oklahoma State on Sept. 21.”