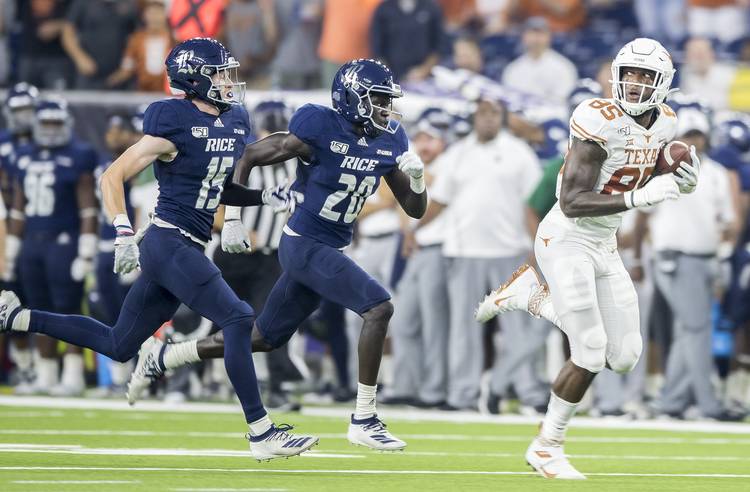 Texas Longhorns wide receiver Malcolm Epps (85) run for the first down as Rice Owls cornerback Andrew Bird (15) and Rice Owls defensive back George Nyakwol (20) tries to make a play during an NCAA football game at NRG Stadium in Houston Texas on Saturday, September 14, 2019. [RICARDO B. BRAZZIELL/AMERICAN-STATESMAN]

It’s all over at NRG Stadium in Houston. Twelfth-ranked Texas, which was a 31.5-point favorite tonight, has beaten Rice 48-13.

Sam Ehlinger produced more than 300 total yards and threw three touchdowns, Keaontay Ingram bounced back just fine from that dropped touchdown catch last week with a pair of touchdown runs, and the defense shut out the Owls for three quarters.

Let’s be honest. This was a mismatch on paper and on the field, and Texas was on the right side of that mismatch. The offensive line controlled things all night. Ehlinger (23-of-27 for 279 yards, 3 TDs) did not disappoint; he was lifted with three minutes left in the third quarter. Keoantay Ingram (74 yards, 2 TDs) made some plays, as did Roschon Johnson. The passing game clicked even without Collin Johnson.

Let’s be honest. This was a mismatch on paper and on the field, and Rice was on the wrong side of the mismatch. Not much went right for the Owls, who still are looking for their first quarterback sack of the season. Tom Stewart, the graduate transfer from Harvard, couldn’t do much in the passing game and Rice couldn’t do much The first snap in UT territory came with four-and-a-half minutes left in the third quarter. Rice’s chances at that first win don’t get much easier; the Owls’ next games are against Baylor, then Louisiana Tech and then at UAB, which is 2-0.

There are a lot of positives to take out of this one. The two biggest takeaways: First, it’s obvious that the LSU loss was adequately placed in the rearview mirror. The Longhorns dominated from start to finish. Second, it has Texas moving in the right direction for the start of the Big 12 schedule next week against Oklahoma State.

“They did exactly what we wanted them to, which was prepare like an elite team, then come out, start fast and prove to ourselves that we can be the team that we know we can,” head coach Tom Herman said immediately after the game.

1. Before we get to the positives, there’s a negative. Senior center Zach Shackelford went down with a right foot injury in the second quarter. He got rolled on. It’s the same foot he’s injured before. He was carted off to the locker room and watched the second half on the sidelines, on crutches and wearing a boot.

3. Daniel Young (4 carries for 16 yards) saw significant action in his return from a high ankle sprain. That ankle didn’t look 100%. But the fact that he’s back, coupled with the fact that Roschon Johnson has been holding his own, is welcome news for the running game moving forward.

4. Collin Johnson didn’t play tonight, held out with a sore hamstring. Without him, it was Jake Smith and Malcolm Epps that impressed. Smith scored on a couple of passes and Epps (4-53) was very involved early on. Brennan Eagles (1-28) had a quiet night, but you figure he’s fine, and Devin Duvernay was his usual busy self (6-60). He now has 27 catches through three games.

5. What you didn’t see — again — was very much out of the tight ends, at least in the passing game. Neither Cade Brewer nor Reese Leitao had a reception. For the season, they’ve combined for four catches for 21 yards through three games.

7. The lopsided game allowed Texas to play its backups in the second half. Juwan Mitchell had a sack, there was a D’Shawn Jamison sighting on one-on-one coverage of a receiver on a downfield shot, and Jacoby Jones made a tackle. Donovan Duvernay was beaten on a big gain inside the 10-yard line late, then bounced right back on the next play with a pass breakup in the end zone. And, of course, there was Jamison’s electric 97-yard kickoff return.

8. And Kennedy Lewis made a catch, then slipped past his defender for a 37-yard gain down the right sideline. The 6-3, 200-pound freshman from Melissa is wearing No. 84, and for just a couple of seconds there, it looked like Lil’Jordan Humphrey was back.

9. Cameron Dicker booted a 57-yard field goal at the end of the first half. That’s tied for the seventh longest kick in UT history. Only Russell Erxleben has kicked a longer field goal.

10. Dicker added another field goal in the fourth quarter. This one was from only 46 yards. Yaawn.

Texas vs. Oklahoma State, 6:30 p.m. next Saturday, Royal-Memorial Stadium. It’ll be on ABC.

It’s the start of Big 12 play. The Longhorns have lost four in a row against Oklahoma State, including last year’s 38-35 game in Stillwater. Oklahoma State (3-0) beat Tulsa 40-21 today. Two of the Cowboys’ three wins have been on the road.