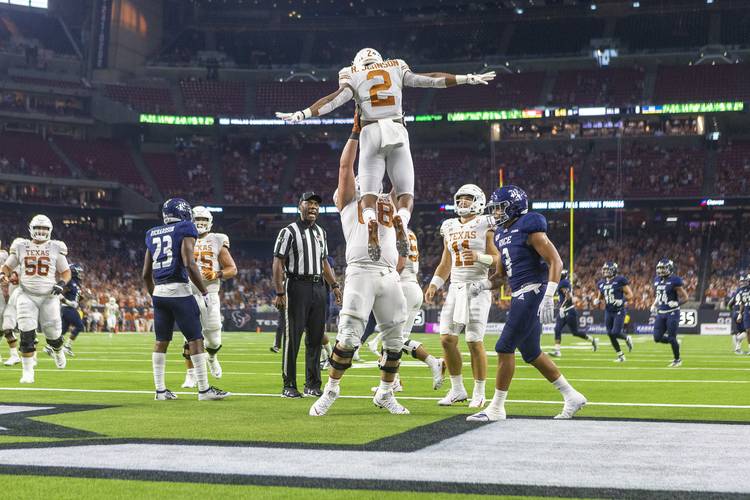 Texas running back Roschon Johnson (2) celebrates his touchdown against Rice with offensive lineman Derek Kerstetter (68) in the first half of an NCAA college football game at NRG Stadium in Houston, Saturday, Sept. 14, 2019. [Stephen Spillman for Statesman]

The fact that the Longhorns are cruising past the Owls is hardly surprising. Texas is more than a four-touchdown favorite, coming off a tough top-10 matchup loss at home to LSU, and want to enter the start of the Big 12 schedule next week with some nice momentum. And remember that Rice is 1-41 against Texas since 1966.

1. Sam Ehlinger is having a fine night. He has as many touchdowns as incompletions. He was 7-of-7 for 86 yards and a touchdown on the first drive. On the night so far, he’s 19 of 22 for 226 yards and 3 TDs. Through two-and-a-half games, he has thrown for 903 yards and 11 touchdowns. Hasn’t thrown an interception yet in 107 attempts.

2. When Texas was stopped on third-and-13 with three minutes left in the half, it snapped an impressive scoring streak. The Longhorns had scored on nine straight drives going back to halftime of last week. That streak was earlier kept alive when Texas went for it on fourth-and-3 at Rice’s 26; Keaontay Ingram burst through a hole cleared by Zach Shackelford and Junior Angilau for the touchdown.

3. That 26-yard touchdown by Ingram also was Texas’ first run of the season that’s gone for more than 20 yards.

4. The offensive line is controlling things up front. Rice hasn’t produced a quarterback sack all season and the Owls haven’t even sniffed Ehlinger tonight. But Shackelford went down with a right foot injury in the second quarter and headed to the locker room. Derek Kerstetter has moved over to center.

5. The Longhorns, who went without a 50-yard offensive play the whole 2018 season, have produced one in back-to-back weeks. Ehlinger hit Jake Smith for a 53-yard touchdown on UT’s second drive. It’s been awhile since Texas was this much of a threat in the vertical passing game.

6. There’s been a Daniel Young sighting. The running back has three carries for 14 yards and a catch that was a 1-yard loss on third down, the play that snapped the Texas scoring streak.

9. Roschon Johnson is impressing. He scored his first touchdown as a Longhorn on Texas’ opening drive, and he did it as a running back making a reception. He has 30 yards on five carries and has three catches 30 yards, including the TD. Not bad for a third-string freshman quarterback who’s three weeks into his running back career.

10. Dicker’s 57-yard field goal is a career-long kick. … Jake Smith’s two TD catches will get the headlines, but the freshman also made a nifty sliding catch on a punt. … On UT’s second drive, Samuel Cosmi wiped out a 49-yard pass play to Malcolm Epps; on a run/pass option play, Ehlinger decided to throw while Cosmi broke off to run-block. He was flagged for being an ineligible receiver downfield. … Kobe Boyce came thiiis close to a 28-yard pick-six touchdown, but he couldn’t hold on to a third-down pass on Rice’s second drive. He’d made a really nice break on the ball.

What to watch for in the second half: (1) How much longer will Ehlinger play tonight? (2) Will Rice score? The Horns’ last shutout was Sept. 9, 2017 — a 56-0 win over San Jose State, which was Ehlinger’s first career start. (3) The Shackelford injury is a reminder that in a blowout game, it’s a good idea to give your backups a chance to play.

Rice will get the ball to start the third quarter.