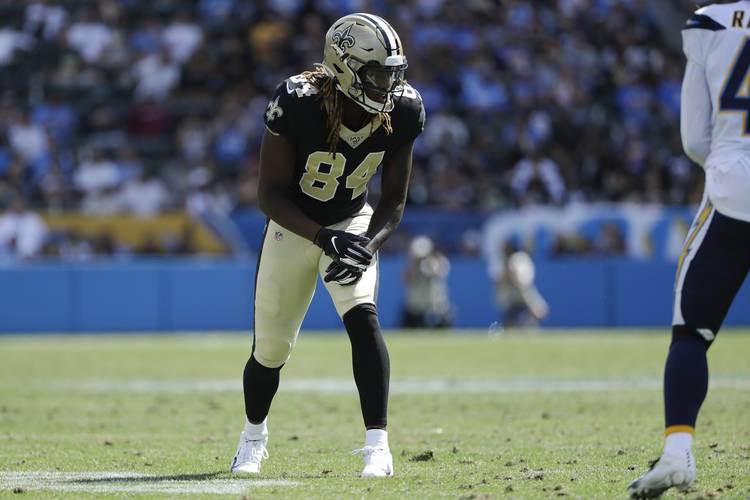 New Orleans receiver Lil'Jordan Humphrey during the second half of a preseason game against the Los Angeles Chargers on Aug. 18, 2019, in Carson, Calif. (AP Photo/Gregory Bull)

Former Texas receiver Lil’Jordan Humphrey has submitted his RSVP for a Longhorn reunion in Seattle this weekend.

The New Orleans Saints promoted Humphrey from their practice squad on Wednesday. The Saints will travel to Seattle this weekend. Seattle has two former Longhorns — defensive lineman Poona Ford and punter Michael Dickson — on its roster.

Dickson, Ford and Humphrey all played on UT’s 2017 team.

With Tre'Quan Smith dealing with an injury and Keith Kirkwood placed on IR yesterday, the Saints have promoted WR Lil'Jordan Humphrey from the practice squad.

Humphrey declared early for the NFL Draft but went undrafted. He later signed with the Saints as a free agent. Humphrey was unable to make the 53-man cut at the end of the preseason, but he then joined New Orleans’ practice squad.

During the preseason, the 6-4, 225-pound Humphrey had four receptions and 103 receiving yards. He also scored on a 33-yard throw.

Lil'Jordan Humphrey ran this route perfectly. Starts the route shallow so the first LB passes him off thinking it's a drag. Then turns it into a deep cross right before the second LB.

Outsmarted both of them for a touchdown. Sometimes playing smart is better than playing fast. pic.twitter.com/9AFp70olSi