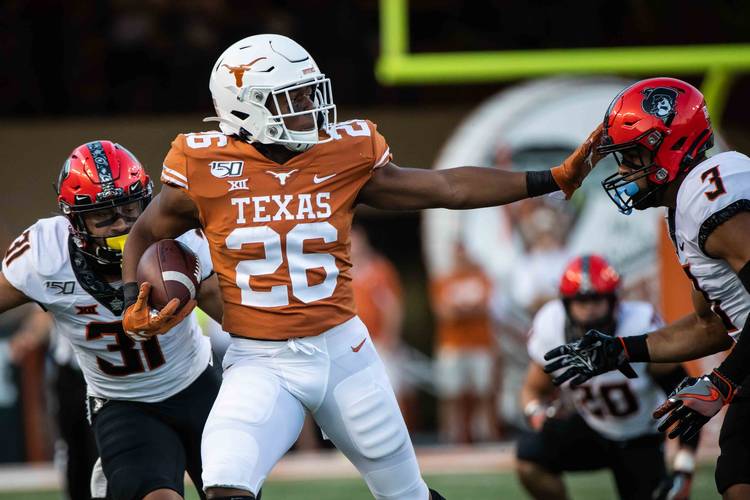 Running back Keaontay Ingram (26) runs with the football during an NCAA football game in Austin, Texas on Saturday, Sept. 21, 2019. [LOLA GOMEZ/AMERICAN-STATESMAN]

It’s halftime at Royal-Memorial Stadium. No. 12 Texas, which is a 6-point favorite tonight, is leading Oklahoma State 21-20.

Those who were expecting a shootout are instead getting a dose of running plays and sustained drives. These teams combined for 73 points last year. There have been a couple of big plays from both sides and Sam Ehlinger and Spencer Sanders both have produced big plays in the passing game. But for the most part, Texas is trusting its running game. The Cowboys are getting picked apart in the middle of the field. Keaontay Ingram has 51 yards. The Longhorns ran it on 16 of their first 20 plays. And the defense has come up big, forcing OSU to settle for field goals on two drives that could have yielded more — the Cowboys’ opening drive made it all the way to Texas’ 1 but the Horns held with a goal-line stand, and a second-quarter drive was ruined by a big play from Jalen Green, who sniffed out a reverse, shed two OSU blockers and smacked Dillon Stoner for a 9-yard loss.

And Brennan Eagles has just one catch. But it was a big one: A 73-yard touchdown late in the half.

A late muffed punt return by Jake Smith allowed the Cowboys to score a touchdown with 11 seconds left in the half.

1. OSU running back Chuba Hubbard is the country’s leading rusher. He’s got only 52 yards and is averaging 2.7 yards per carry.

2. OSU wide receiver Tylan Wallace is the country’s leading receiver. He has only three targets for 66 yards.

The Cowboys’ opening drive was 13 plays long. Either Hubbard or Wallace touched the ball on nine of those plays.

Complete for a 20-yard gain and a first down. Estell was in coverage.

Complete for an 11-yard gain and a first down. Caden Sterns was in coverage.

Complete for a 35-yard gain and a first down. Sterns was in coverage.

4. For the second straight week, Texas is playing without Collin Johnson. The senior wide receiver was an announced scratch about two hours before kickoff with a sore hamstring. Devin Duvernay is hogging things in the passing game; he has seven catches and no other UT receiver has more than one.

5. This could very well be a 24-20 game. The Horns’ drive stalled at OSU’s 28 with 5:30 left in the half. Dicker stepped onto the field, thinking he’d try a 45-yard field goal attempt, but was called back. Texas went for it on fourth, and Roschon Johnson was stopped for a 2-yard loss.

7. Texcetera: It won’t be reflected in the boxscore, but the Horns had a spirited goal-line stand from inside the 5 on OSU’s opening drive. Three straight runs by Hubbard. The Cowboys settled for a field goal. … Parker Braun was flagged for holding on UT’s first drive, wiping out a 22-yard gain by Ingram. … Cornerback Jalen Green, who’s drawn most of the coverage duties tonight on Wallace, was shaken up toward the end of the half.

What to watch for in the second half: (1) Wallace, for the most part, has been held in check. Texas will take three targets per half. Look for the Cowboys to take more shots with him. (2) Hubbard also has yet to get untracked. The Horns are blanketing him up the middle and the safeties are doing their job when he runs wide. (3) Will Ingram end up with 100 yards? (4) Will Jalen Green play?