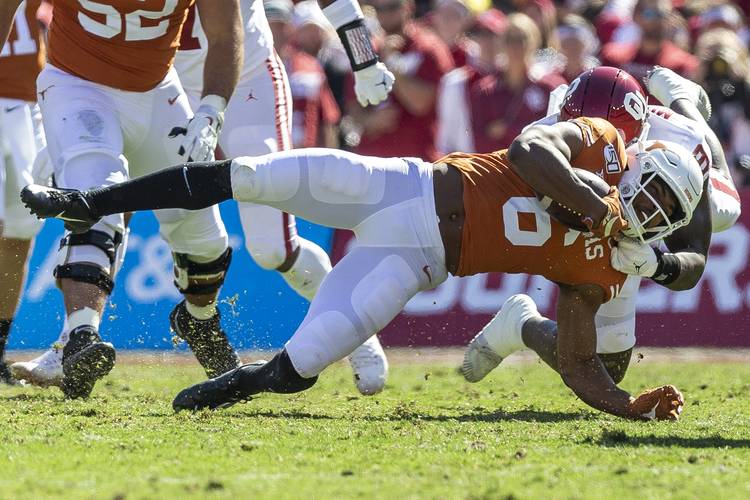 Texas wide receiver Devin Duvernay (6) is tackled by Oklahoma linebacker Kenneth Murray (9) in the first half of an NCAA college football game at the Cotton Bowl in Dallas, Saturday, Oct. 12, 2019. [Stephen Spillman for Statesman]

This Red River Showdown has been a Red River Reversal — Texas’ offense is struggling but the defense is making plays, while OU’s defense has stymied Sam Ehlinger but Heisman hopeful Jalen Hurts has made two big mistakes. You can make the case that this should really be a 21-0 game, but those Hurts miscues (one inside the 10, one interception in the end zone) have really hurt the Sooners.

The Sooners, though, are controlling this game. The Longhorns certainly have things to figure out during halftime.

1. In this matchup of Heisman contenders, Hurts is looking better. There are the two costly turnovers, of course, but he has 200 total yards and has a touchdown pass. Ehlinger, meanwhile, hasn’t looked this frustrated on the field in quite some time. He has 64 yards of total offense. That’s right, 64. He’s 9 of 11 throwing it, but for only 71 yards. He’s minus yardage in rushing, he’s already been sacked four times and has tested OU’s secondary just once (a well-thrown pass that Jake Smith couldn’t control).

2. Texas’ defense is certainly bending, but it isn’t breaking. The Longhorns have forced two turnovers and have come up with stops and big plays at opportune times. Hurts has accrued yards but not points. For the game, OU has 260 yards of offense. Texas has just 83.

3. This game started off shaky for Texas. The Longhorns lost the coin toss, then had problems stopping OU’s run game on the Sooners’ 10-play, 66-yard touchdown drive to open the game. B.J. Foster left the game with what looked like a shoulder injury on that drive, too. CeeDee Lamb finished it with a touchdown catch in his eighth straight game. And Texas then went three-and-out on its first drive, Sam Ehlinger getting sacked on third down.

4. Foster was injured while trying to make an open-field stop on Lamb. He twisted awkwardly as Lamb made a move and walked off the field on his own power, though shakily. Looked like a shoulder issue.

5. In other injury news, after Lincoln Riley called both of his starting offensive tackles “highly questionable” to play this week, Erik Swenson started at left tackle and Adrian Ealy started at right tackle anyway. But Sooners tight end Grant Calcaterra was a pre-game scratch, out with an injury. That should be just fine with the Longhorns; in last year’s Big 12 championship game, Calcaterra’s one-handed touchdown catch sealed the Sooners’ win. Over on Texas’ side, Collin Johnson is back after missing the Rice, Oklahoma State and West Virginia games; he has 3 catches for 39 yards.

Moments that have mattered

The first hold-your-breath moment came at the end of OU’s opening drive, when the Sooners went for it on fourth-and-goal from the 1. Touchdown, Hurts to Lamb.

Anthony Cook’s hit on the tail end of Hurts’ 21-yard scramble forced a fumble, turning a first down inside Texas’ 10 into a turnover thanks a video review. D’Shawn Jamison, who made the two big picks in last week’s win at West Virginia, recovered it.

With 11 minutes left in the half, OU faced third-and-8 from Texas’ 11. The Longhorns trailed 7-0, and 10-0 sounds — and feels — a lot better than 14-0. After a timeout, Hurts tried to buy time before zipping it into the end zone. But Brandon Jones picked it off for the Sooners’ second turnover deep in UT territory.

It was, given the circumstances, a huge play. Paired with the Cook turnover, this easily could have been a 21-0 game, or at least a 13-0 game had the Sooners had to settle for field goals.

Third downs have been a real adventure — for both sides. Texas has faced six third downs and converted two. Oklahoma has had two third downs, with positive results on just two of them.

Third-and-goal, from the 9: To Lamb, who made a move on Foster, for 8 yards. Fourth down.

Third-and-5: Hurts rolled to the left, kept it for 21 yards. 1st down but also a fumble. Turnover

Horns up: Anthony Cook forced a fumble, had a 6-yard tackle for loss and has handled most of the coverage duties on Lamb. … Ryan Bujcevski’s first punt of the day was a 41-yarder that was downed at OU’s 5. … Montrell Estell made a nice stop on Lamb on a punt return.

Perhaps surprisingly, this has been a disciplined game. Surprising because emotions certainly were revving high during pregame warmups; there was a confrontation between the two teams on the field about 10 minutes before kickoff, and officials called an unsportsmanlike conduct penalty on all players for both teams. What that means, though, is that if there’s another one called during the game, that player will be ejected.

Things to watch in the second half: (1) Will Texas get its running game going? Keaontay Ingram (2 carries for 9 yards) and Roschon Johnson (2 carries for 5 yards) have been pretty quiet. (2) Will the defense make the right adjustments? The Sooners have had success when Texas has gone with man coverage. (3) Will Hurts keep finding success on keepers? He has 12 carries for 107 yards, and 202 yards overall.