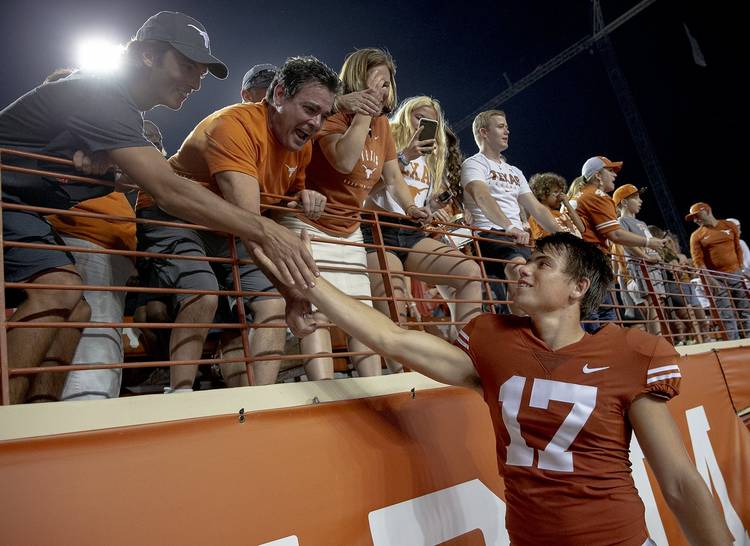 On Saturday night, Texas sophomore Cameron Dicker nailed a 33-yard field goal with no time remaining in a 50-48 win over Kansas.

Ranked 15th in the AP poll, Texas is now 5-2 this season. With the field goal, Texas avoided its first-ever loss to Kansas in Austin. The Longhorns are now 9-0 at home against the Jayhawks.

Dicker’s kick will be placed on an exclusive highlight reel at Texas. Since 2000, only five field goals have ended a game for the Longhorns.

Last year, Dicker kicked a 40-yard field goal with nine seconds left in a 48-45 win over rival Oklahoma. But since that game was tied and time was winding down in regulation, Texas could have survived a miss. That was not the case on Saturday. Did Dicker’s mindset change with that do-or-die scenario? Said Dicker: “I just go in with the same idea of the same kick every time and just staying calm when I go out there… It’s just me, Ryan (Bujcevski, the holder) and Justin (Mader, the long snapper) pretty much out on the field.”

Tucker’s last field goal as a Longhorn was technically a 39-yarder against Baylor on Dec. 3, 2011. But tt was his second-to-last kick that Texas fans will never forget, though. Tucker nailed a 40-yard kick with no time left in a 27-25 win in College Station. Texas and Texas A&M haven’t played since and the Longhorns still maintain a 76-37-5 lead in the all-time series.

Nebraska fans will insist that this game should have ended on an incomplete pass by Colt McCoy, but the scorebook says differently. With one second still remaining after that aforementioned pass, Lawrence snuck a 46-yard field goal inside the left upright. That kick in Arlington secured Texas a conference championship and a trip the BCS title game.

Bailey’s 40-yard buzzer beater lifted Texas to a 38-35 win on the road. Ranked 14th in the AP poll, Texas found itself in a 35-14 hole in Stillwater at the beginning of the fourth quarter. Jamaal Charles led the comeback with two fourth-quarter touchdown runs, but it was Bailey who contributed the biggest highlight.

One year before Vince Young scampered into the end zone, Texas closed out its 2004 season with another dramatic victory at the Rose Bowl. A 37-yard field goal by Mangum was the difference in UT’s 38-37 triumph in the 2005 Rose Bowl. That was the 50th and final field goal of Mangum’s UT career. Only three Longhorns have kicked more field goals than Mangum, who is UT’s all-time leader in extra points.

With Signing Day on the horizon, Texas receives commitments from two softball recruits