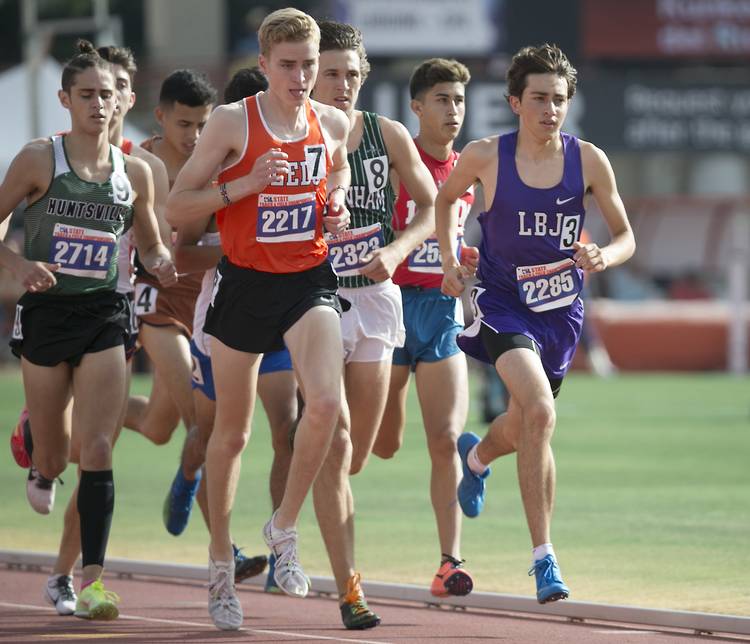 Aledo's Graydon Morris (center) leads a pack of runners as they compete in the Class 5A 3,200-meter run at Myers Stadium on May 11, 2018. Morris won the race. RALPH BARRERA / AMERICAN-STATESMAN

After receiving verbal commitments from a pair of gold medalists, burnt orange won’t be the only color tied to the Texas track and field program’s upcoming recruiting class.

Gracie Morris, a senior at Aledo High, tweeted on Sunday that she will run at Texas next year. Graydon Morris, Gracie’s twin brother, revealed the same news on Instagram.

Excited to announce that I have committed to the University of Texas to further my education and running career! HOOK’ EM🤘 pic.twitter.com/dtcy9MmqCr

Excited to announce that I have committed to The University of Texas to further my education and running career! HOOK ‘EM 🤘

Graydon Morris is currently the two-time defending champion at the University Interscholastic League’s Class 5A cross-country meet. He has won the last two Class 5A 1,600-meter runs during the track and field season. Graydon finished first in the Class 5A 3,200 meters as a sophomore, and he won silver in that race in 2017 and 2019.

Gracie Morris is also a gold medalist as she won the Class 5A 800-meter title in 2017. That spring, she was also the runner-up in the 1,600 meters. As a sophomore, Gracie placed third at the Class 5A cross-country meet.

With Signing Day on the horizon, Texas receives commitments from two softball recruits