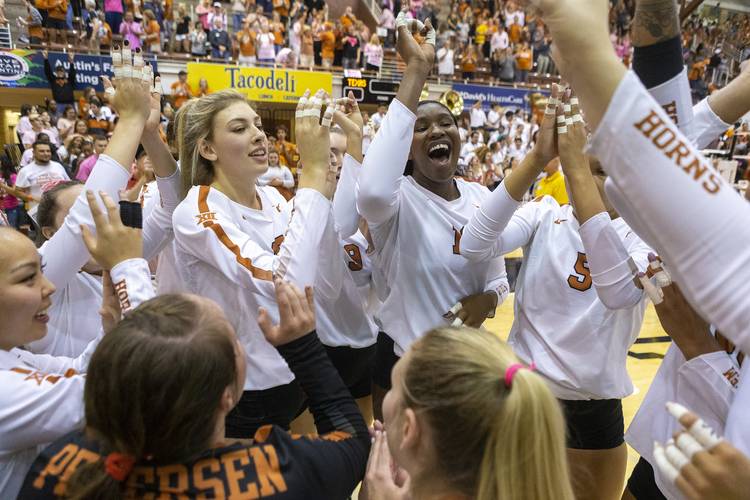 After beating Baylor last week, Texas has inherited the Bears’ spot in a national poll.

Texas topped the AVCA poll on Monday. Ranked fourth last week, the Longhorns received 43 of the 64 first-place votes and finished with 1565 points. With 1,529 points, Pitt checked into second place.

Texas was last ranked first when the AVCA released its preseason poll ahead of the 2017 season.

Texas (14-2) swept both Baylor and Kansas last week. Baylor had been the AVCA poll’s No. 1 team in each of the previous four weeks. The previously-undefeated Bears were handed a 25-19, 25-10, 25-19 loss during its trip to Austin on Wednesday.

Baylor (17-1) dropped to third in the AVCA poll. Baylor and Texas were ranked first and second in the NCAA’s RPI rankings, which were also released on Monday.

Despite a loss to Texas, @BaylorVBall holds on to the top spot in this week’s @NCAAStats RPI release: https://t.co/Sk8MvPVRtO#NCAAVB pic.twitter.com/AHluzftVVK

On Monday, the Big 12 also applauded UT middle blocker Brionne Butler and freshman Skylar Fields for their efforts last week. Butler, who had 16 kills, 13 blocks and a .367 hitting percentage, against Baylor and Kansas, was named the offensive player of the week. Fields earned her fourth rookie of the week award after collecting 15 kills and a .406 hitting percentage.

Texas will travel to Texas Tech (14-8) on Wednesday. West Virginia (10-11) will visit the Longhorns at noon on Sunday.