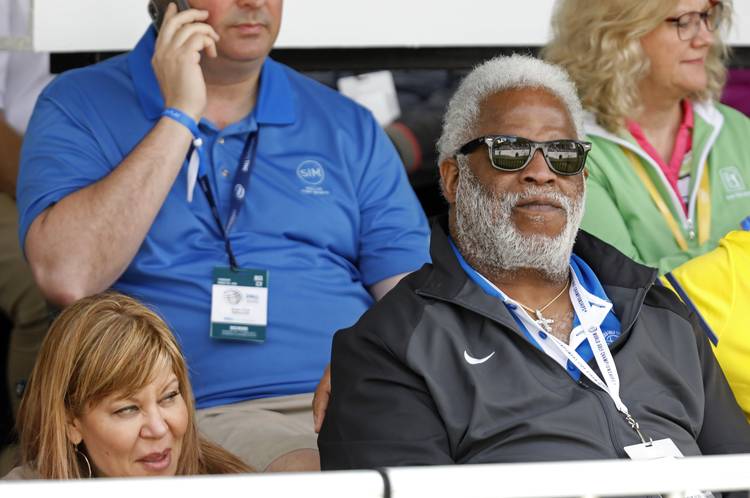 Earl Campbell watches the WGC-Dell Technologies Match Play at the first tee Thursday March 28, 2019 at the Austin Country Club. (Photo by Edward A. Ornelas for Statesman)

Earl Campbell thinks he can fix the Longhorns. Texas’ first Heisman Trophy winner told me last week that he loves Sam Ehlinger, but he has a requirement for future Longhorn quarterbacks. “Until the University of Texas realizes —, and nothing against Ehlinger, you got to have a talented, black quarterback,” Campbell said. “All these schools that are winning, even in the pros, have black quarterbacks. When guys are not open, something can still happen.” He mentioned Tua Tagovailoa, Vince Young, Jalen Hurts, Deshaun Watson and J.T. Barrett, who wanted to come to Texas. Campbell said he really admires Hurts and said they became close friends after the quarterback was a finalist for the Earl Campbell Award. They text each other often. “He reminds me of myself,” Earl said. “He’s a calm individual. He doesn’t get too excited and keeps it all inside. Nick Saban did all he could to kill his motivation. Jalen is one of the most classy individuals I’ve ever seen play sports. It looks like Oklahoma is going to win the Heisman a third year in a row. It looks like he’s not even running, like he’s walking.”

On the NCAA’s decision on name, image and likeness issues for college athletes:

So we have progress. Hopefully definitive progress. The NCAA’s top policy-making group Tuesday voted “unanimously to permit students participating in athletics the opportunity to benefit from the use of their name, image and likeness in a manner consistent with the collegiate model.” The devil will certainly be in the gory details, but the Board of Governors said the NCAA rules changes could begin immediately provided athletes are treated like non-athletes “unless a compelling reason to differentiate,” and the rules do not adversely affect “fair and balanced competition.” Yeah, good luck with that. These rules figure to be very elastic. This has to scare the NCAA to death, but changing the landscape is the only way it can survive. Amateurism is dead or at least at the high school level. Embrace this, NCAA. This is a long overdue win for the athletes.

On the Longhorns mediocrity in 2019:

The biggest caveat to this Texas football season was always the health of Ehlinger and his ability to remain upright. That hasn’t been an issue as the junior has not missed a single meaningful snap in all eight games. That said, however, the 5-3 Longhorns are trending in a bad direction and have taken a detour toward mediocrity, thanks to the lack of a pass rush and horrible pass coverage, and have deservedly fallen out of the ranks of the Top 25. … Don’t really like UT’s chances of running the table, especially with two tough road trips to Iowa State and Baylor. If the Longhorns split their last four games to finish 7-5, that would mark a colossal setback for Tom Herman’s program going 10-4 last year. No question, the injuries in the secondary have been crippling. But otherwise Texas has been healthy mostly everywhere else except for running back Jordan Whittington and wide receiver Collin Johnson. … TCU coach Gary Patterson was reveling in his victory over Texas on Saturday and defended the slow evolution of freshman quarterback Max Duggan, who played masterfully in the win. “Everybody wants players to be like hot cocoa,” Patterson said of Duggan’s development. “You just want to rip off the cover, pour it in, pour hot water in and then they’re a great player. Cocoa’s ready to go. It’s not that easy. It’s not that easy.” He’s right.

For the rest of Kirk’s 9 Things, including his thoughts on Baylor, Jack Nicklaus and the Houston Texans, click here.