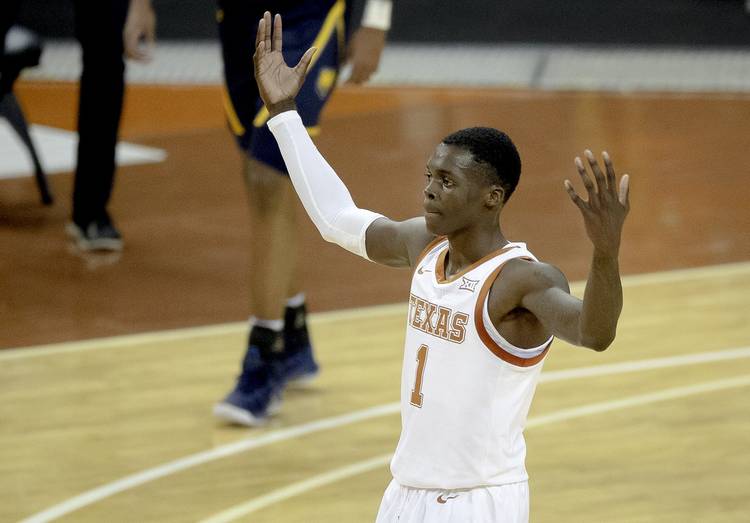 The Texas guard was putting up an inspirational battle with leukemia, but playing competitive Big 12 basketball? It was a pipe dream, or so everyone thought. Well, not exactly everyone.

Jones never gave up on his dream, and he was rewarded Tuesday with one of the most memorable nights of his life. The 6-foot-4 warrior poured in 20 points in 29 minutes, setting a new career high scoring total and blowing away any and all preconceived notions about his health in a 69-45 victory over Northern Colorado at the Erwin Center.

It was Jones’ most prolific output since that fateful night on Dec. 5, 2017 when he suffered a fractured wrist injury in a win at Virginia Commonwealth. That injury forced him to sit out for several weeks, and when Jones returned around Christmas, he noticed having a shortness of breath. On Jan. 10, 2018, UT announced that Jones had been diagnosed with leukemia.

Jones’ recovery was chronicled throughout 2018, and ESPN even brought its signature “College GameDay” broadcast to Austin to highlight “AJ1” mania.

Smart said Jones had recovered well enough that he was going to play “significant” minutes this season. Texas has classified Jones as a redshirt sophomore, meaning he technically has three years of eligibility remaining.

This night belonged to Jones, but it was also a good night for Texas’ other two backcourt leaders — Courtney Ramey and Matt Coleman. Ramey had his second career double-double with 16 points and 10 rebounds, doing all the things coach Shaka Smart wants him to do in an all-everywhere fashion. Coleman finished with 10 points and was 4-for-8 shooting.

Fans didn’t really notice when Jones went to the scorers table to check in. He walked onto the court with 13:50 left in the first half to little fanfare. That in itself was a major moment. The athlete who overcame leukemia just wants to be treated like everyone else this season. Jones drew a charge and hit a nifty little floater late in the first half. That bucket brought fans to their feet for a standing ovation. Jones hopes to do that all season long.

It's been 673 days since Andrew Jones' last field goal in a game.

It's good to see him back. pic.twitter.com/GTJZLJJj4l

Smart was disappointed that sophomore Gerald Liddell was not cleared from the concussion protocol to play in the opener. UT trainers take concussions and head injuries serious, though. Liddell went through an individual workout a few hours before the game. Redshirt freshman Brock Cunningham from Westlake started in Liddell’s place and started 0-for-3 from 3-point range. That’s probably not exactly what Smart had in mind from his defense and energy machine.

Basketball doesn’t really have “defensive coordinators” like football. But that’s exactly what first-year assistant Luke Yaklich is supposed to be for this coaching staff. He had to like the early results. Northern Colorado went 8 minutes, 59 seconds between field goals in the first half and shot 22.2% overall before the break. The Bears were 0-for-10 from 3-point range. If the Horns can put up that kind of defensive resistance all season, this year will be sensational.

The competition steps up dramatically this weekend with Saturday’s road trip to Purdue, a return game in a home-and-home contract. Texas beat Purdue in Austin last season 72-68. The Boilermakers are expected to shoot for the Big Ten title this season. Kenpom projects coach Matt Painter’s club to go 22-8. Purdue opens the season Wednesday against Green Bay.