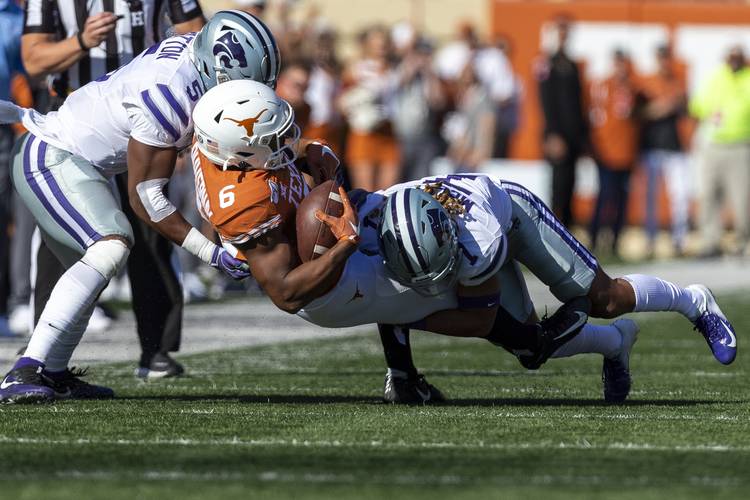 It’s halftime at Royal-Memorial Stadium. Texas, which is a 7-point favorite today but 0-2 vs. ranked teams this year, is trailing No. 16 Kansas State, 14-7.

And the Longhorns should consider themselves lucky to only be down by one touchdown. The Wildcats are producing some big gainers and chunk plays, committed a turnover in UT territory and were threatening again late in the half before a third-down sack knocked them out of field goal range. Texas, coming off a bye week, has put together only one meaningful drive.

1. Perhaps the most interesting matchup today is how each team fares on third downs. This is a classic strength vs. strength situation; Texas, with a 54% success rate, ranks No. 3 in the country in third-down conversions while Kansas State ranks No. 2 in stopping third downs — opposing teams have just a 27% clip. In fact, through eight games, K-State had allowed only 21 third-down conversions.

Today, third downs are being won by the Wildcats.

2. Walking wounded update. Caden Sterns is back. He’s tied for the team lead with three tackles. We haven’t seen DeMarvion Overshown, Jeffrey McCulloch or Jordan Whittington. B.J. Foster has two tackles and half a sack.

3. If you were worried about what might happen to the punt game with Ryan Bujcevski out with a broken collarbone, don’t. Chris Naggar, the non-scholarship backup, is averaging 45.0 yards on his two kicks.

4. Horns up: Brandon Jones forced a fumble in the second quarter. … B.J Foster and Ta’Quon Graham were credited with a sack late in the second quarter, and Malcolm Roach forced it with a disruptive pass rush. … Texas’ touchdown came on a mini-flea flicker, as Roschon Johnson flipped the ball back to Ehlinger, who found Collin Johnson wide open.

5. Horns down: Brandon Jones was beaten on the Wildcats’ first two touchdowns, the most egregious the first one when he completely whiffed an open-field tackle for a 70-yard score. … Samuel Cosmi was flagged for holding late in the first quarter, wiping out a 29-yard pass to Collin Johnson. … Texas, trailing by 7, got the ball with 1:12 left at its own 19 but decided to run out the clock.

What to watch for in the second half: Um, will we see Whittington on the field at all? He hasn’t played since the season opener and was cleared to play this week.