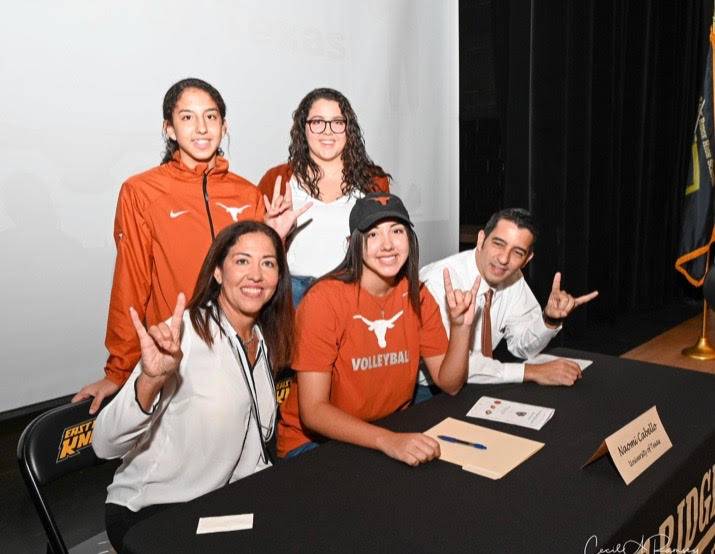 Naomi Cabello, a setter who attends high school in Florida, celebrates after signing with Texas on Nov. 13, 2019. [SUBMITTED PHOTO]

Texas’ volleyball team celebrated both its present and future on Wednesday.

Ranked first in the AVCA poll, Texas swept Kansas State on Wednesday and improved its record to 18-2. Earlier in the day, Texas also announced that four prospects had signed with the Longhorns. Mansfield Lake Ridge outside hitter Madison Williams and Rouse defensive specialist Reilly Heinrich both opted to remain in the Lone Star State for college. Additionally, Texas secured the signatures of Florida setter Naomi Cabello and California libero Nalani Iosia.

Texas’ 2020 recruiting class is anchored by Cabello and Williams, who were both top-10 recruits on PrepVolleyball.com’s Senior Aces list. Iosia is an AVCA Under Armour All-American. Heinrich, whose Rouse team is still alive in the University Interscholastic League’s playoffs, is her district’s reigning defensive MVP.

In a statement, Texas coach Jerritt Elliott said “This class as a group is very proficient in their skill sets, they are all great competitors, and they complement the group we have right now.” Elliott also hinted that the Longhorns may not be done recruiting.

“I think they are ready to come in and compete from day one and add to the loaded team we have,” Elliott added. “This is just the start of this class; we look forward to rounding it out in the near future.”