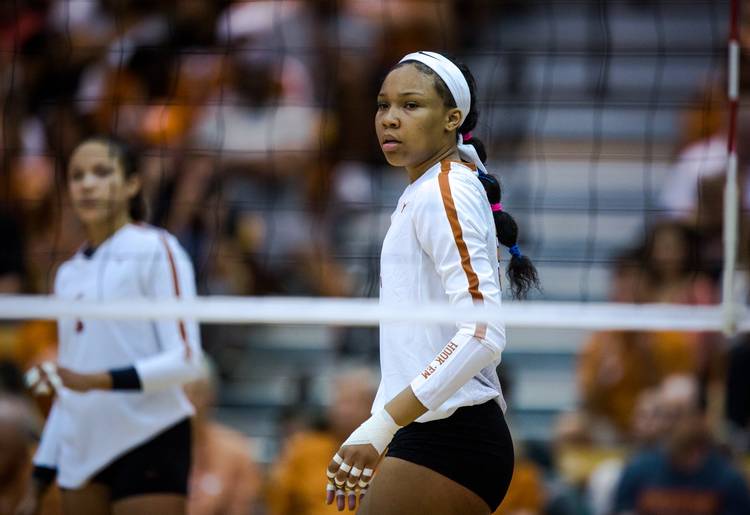 Once again, the Big 12’s top newcomer in volleyball is a Longhorn.

On Tuesday, it was announced that Texas opposite hitter Skylar Fields had been unanimously chosen as the Big 12’s freshman of the year. Texas now has three players on its roster who have been dubbed the Big 12’s best freshman. Senior outside hitter Micaya White (2016) and sophomore outside hitter Logan Eggleston (2018) were recent recipients of the award.

In its history, Texas has won the Big 12 Freshman of the Year award nine times. Five of the previous eight winners — White, Chiaka Ogbogu, Haley Eckerman, Juliann Faucette and Mira Topic — were eventually named the Big 12’s player of the year.

One of the 2019 recruiting class’ top prospects, Fields was the co-pick in the preseason for the Big 12’s freshman of the year award. She registered 15 kills in her collegiate debut and went onto average 2.59 kills per set with a .330 hitting percentage. On five different occasions, Fields won the Big 12’s weekly honor for rookies.

“I’m part of a team as well, so I’m trying to do what I can for the team and not focus on (solo awards),” Fields said on Tuesday. “The weekly honors were cool and all, but I think it’s all about getting the dub for the team.”

On Tuesday, the Big 12 named Baylor’s Yossiana Pressley, Hannah Lockin and Ryan McGuyre as its top player, setter and coach. Oklahoma’s Keyton Kinley was recognized as the best libero in the conference. White was the Big 12’s MVP last season, but she was dethroned after Pressley’s 5.52 kills-per-set ranked second nationally.

The NCAA Tournament will get underway this week. The Longhorns (21-3) are set to host Albany (16-10) on Thursday night. Texas is the postseason’s second overall seed.