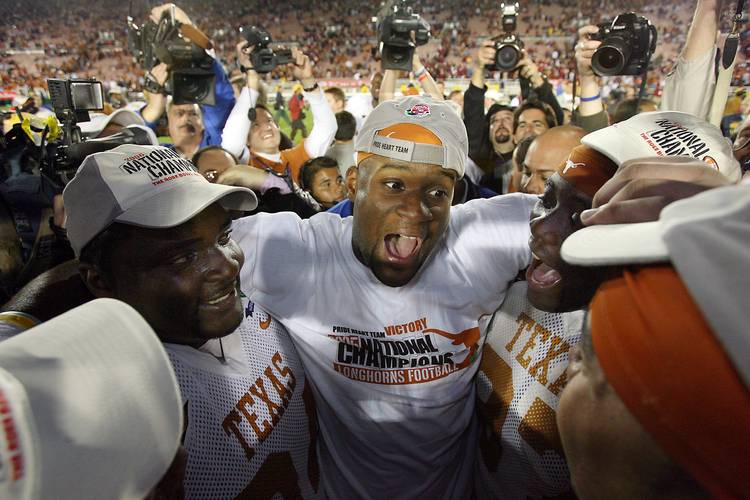 It’s the 150-year anniversary of college football, our favorite sport. So there have been oodles of lists detailing memories of historic players and games and coaches and moments.

Vince Young’s fourth-down run late in the 2006 Rose Bowl against Southern California was named Thursday as the most memorable bowl moment in the college football era, which started in 1869 when Rutgers and Princeton played the first game.

The Football Bowl Association compiled the list of the 25 greatest moments. Also among the top 25:

Texas’ stop of Alabama quarterback Joe Namath on a fourth down sneak to clinch the 1965 Orange Bowl was named No. 7.

Colt McCoy’s touchdown throw to Quan Cosby to beat Ohio State in the 2009 Fiesta Bowl came in at No. 14.

Every Longhorn fan knows the Young play. Texas was down by 5 points to the Trojans, the defending national champions. There were 26 seconds to play. The Longhorns were on the USC 8.

The call sent receiver Limas Sweed to one corner of the end zone as Young’s first read. Tight end David Thomas was in the opposite corner, looking for a fade. Quan Cosby was the third read if Young had time to go through his progression.

But the Trojans rush flushed Young from the pocket. With key blocks thrown by lineman Justin Blalock and tailback Selvin Young, VY glided into the end zone for the touchdown.

Young was inducted into the College Football Hall of Fame earlier this week.

Plays involving Oklahoma were named No. 2 and No. 3.

Boise State’s infamous hook-and-ladder play to convert a fourth-and-18 against OU in the 2007 Fiesta Bowl was named the second-best all-time bowl play. It sent the game into overtime. The No. 3 best play also came at the expense of the Sooners. It was the “Statue Left” two-point conversation that allowed Boise to beat OU in overtime.

The 1965 Orange Bowl allowed the Longhorns, the defending national champions, to win its 10th game of the year. UT’s lone loss was by one point to Arkansas.

Linebacker Tommy Nobis, one of the best players in school history, thwarted Namath on the fourth-and-inches play to seal UT’s victory of the top-ranked Crimson Tide.

Texas was hoping to play for a national title in 2008, but was left out of the BCS game by the slimmest of margins. The Longhorns consolation prize was a date to the Fiesta Bowl to take on the Buckeyes. The win was UT’s 12th of the year.