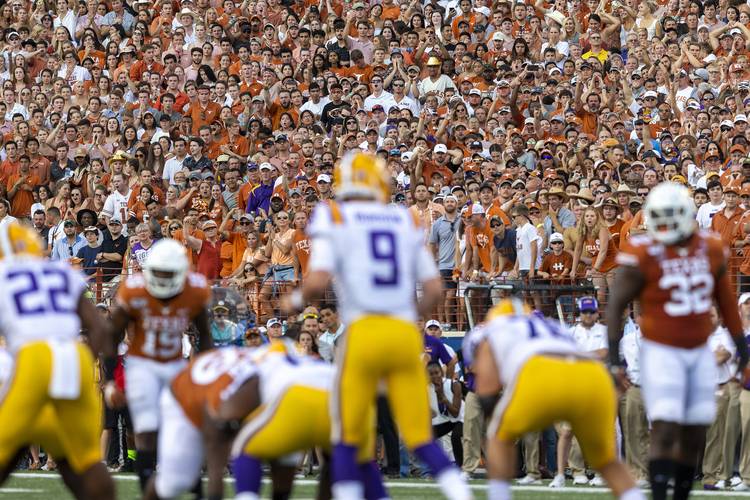 On Saturday night, LSU quarterback Joe Burrow was named the recipient of the 2019 Heisman Trophy.

Burrow outpaced the Heisman Trophy’s runner-up — Oklahoma quarterback Jalen Hurts — by an award-record 1,846 points. He joins former LSU running back Billy Cannon as the only Tigers to claim the Heisman Trophy. Cannon was college football’s top player in 1959.

Joe Burrow has won the Heisman Trophy by the largest margin of victory in history (total points):

The crowning of Burrow means that the last three Heisman Trophy winners all played Texas during their standout seasons. Oklahoma quarterbacks Baker Mayfield and Kyler Murray won the award in 2017 and 2018. Since this millennium kicked off, only Kansas State (2001-03), Colorado (2001-03), UCLA (2002-05), Chattanooga (2008-10) and Texas (2017-19) have been tied to three straight Heisman Trophy winners.

Excluding bowl games, Texas is now 4-12 in its battles with opponents that boasted that year’s Heisman Trophy winner. How did Texas fare against Burrows, Murray and Mayfield?

During the season’s second week, Burrow stepped into a nationally-televised spotlight. In the seven-point conquest, Burrow was intercepted once but he still completed 31 of his 39 passes. That efficient effort led to 471 yards and four touchdown passes.

In his final statement to the Heisman Trophy voters, Murray guided Oklahoma to a conference championship with his arm. Murray’s 25 completions in the Big 12’s title game resulted in 379 yards and three touchdowns. He also rushed 10 times for 39 yards.

Murray was bested by UT quarterback Sam Ehlinger at the Cotton Bowl, but he still did his part. Murray threw for 304 yards and four touchdowns and also ran for a 67-yard score. Murray’s performance helped Oklahoma tie the game after the Sooners fell behind 45-24. The game was eventually decided by Texas freshman Cameron Dicker’s 40-yard field goal.

Mayfield was intercepted once by UT’s defense, but he burned the Longhorns with two touchdown tosses that exceeded 50 yards. The second touchdown pass covered 59 yards and it gave Oklahoma a 29-24 lead with 6:53 left. Mayfield exited his fourth start against Texas with 302 passing yards on 27 attempts.

In defeat, Ehlinger threw for 278 yards and ran for 106 yards. In his four starts against Heisman Trophy winners, Ehlinger has rushed for seven scores and his arm is 97-of-157 for 1,342 yards, nine touchdowns and one interception. During those contests, Ehlinger’s counterparts were 92-for-126 for 1,456 yards, 13 touchdowns and three interceptions.