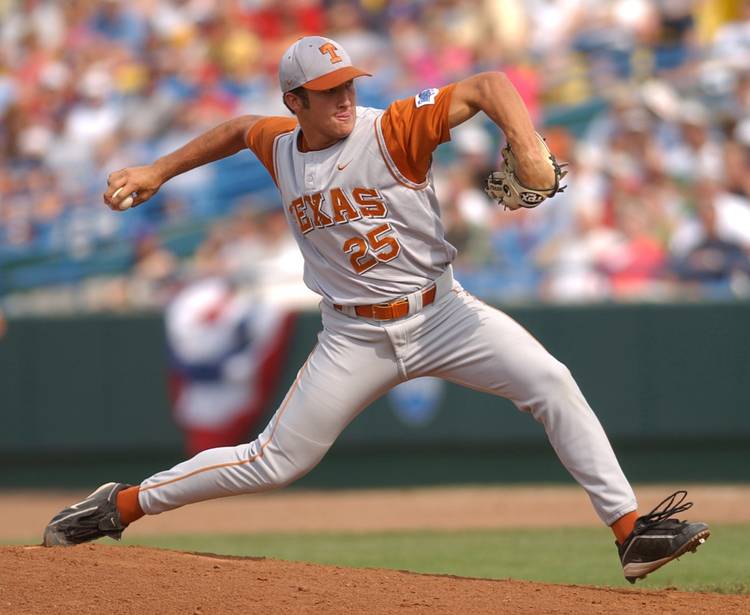 For the first time since 2010, Texas has retired the jersey belonging to one of its legendary baseball players.

Former UT pitcher Huston Street’s jersey will be retired during the 2020 season, the school announced on Tuesday. Texas athletics director Chris Del Conte told Street the news during a recent team meeting. Street, who is currently serving as a student assistant coach, will be honored at a yet-to-be-determined date this spring.

Street wore No. 25 at Texas. That number has actually been retired since the team honored Scott Bryant in 2008.

It is our honor and privilege to announce that '02 @NCAACWS MVP and Longhorn Legend @HustonStreet's No. 2️⃣5️⃣ will be forever retired at the Disch.

Street becomes the seventh baseball player to have his jersey retired at Texas. He joins Bryant, Keith Moreland (No. 3), Burt Hooton (No. 20) and Brooks Kieschnick (No. 23). Texas has also set aside the No. 21 jersey that was worn by both Roger Clemens and Greg Swindell.

In a statement, Del Conte said that “What Huston Street did for The University of Texas and College Baseball is truly amazing. He was just so dominant, such a fierce competitor and when he took the mound, you knew he was going close out the win. As a fan of college baseball, I truly admired him from afar but getting to know him better now that I’m at Texas, has been awesome. He has such great Longhorn pride and passion and truly loves everything about The University of Texas. There’s no question he bleeds burnt orange and we’re so thrilled to be retiring his number.”