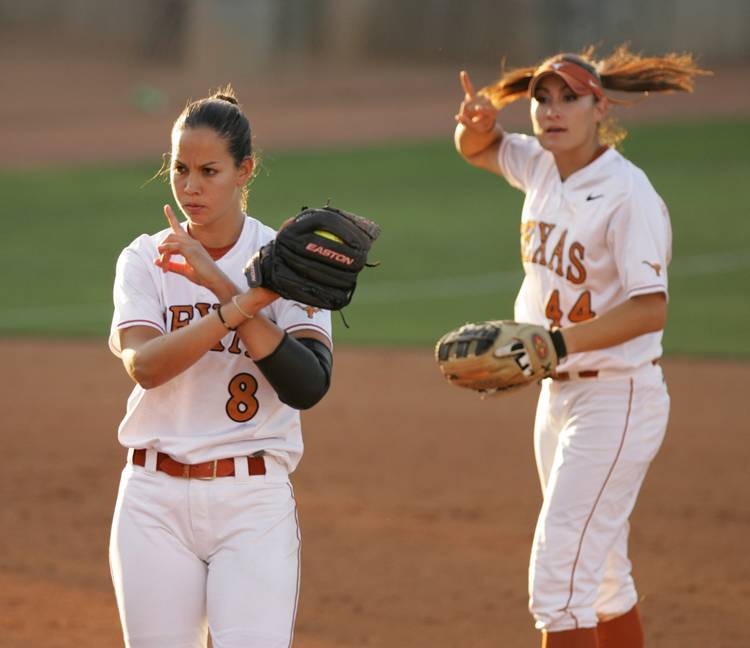 Texas pitcher Cat Osterman (#8) celebrates a strikeout with teammate Desiree Williams during a 4-0 win over UTSA at McCombs Field on May 19, 2006. (Chris Carson/American-Statesman)

Nearly 19 years ago, Cat Osterman was asked about the possibility of having her jersey retired by Texas’ softball program.

“If they did, that’d be cool,” the then-senior pitcher told the American-Statesman.

On Tuesday, Texas made the “cool” announcement that its softball team will finally retire Osterman’s jersey. The No. 8 had been set aside since Osterman’s last game in 2006. UT’s athletic department, however, only recently lifted a longstanding policy that did not allow the official retirement of numbers worn by female athletes.

Osterman starred at Texas from 2002-03 and again from 2005-06. She will be honored this spring when the Longhorns host UT Arlington on March 25.

“The news of my upcoming jersey retirement put tears in my eyes,” Osterman said Tuesday in a statement. “I cannot thank Chris Del Conte, Chris Plonsky and the University of Texas enough for this honor. It was an absolute privilege to have the opportunity to represent Longhorn nation as a student-athlete at Texas. It’s mind blowing to think my jersey will now be retired alongside some of the greatest athletes to ever play their sport on the Forty Acres.”

Former UT pitcher Christy Guidorizzi first wore the No. 8 for the Longhorns during the 1997 and 1998 seasons and Tracy Wisdom inherited that jersey in 1999. That number, though, has been synonymous with Osterman since her Texas debut in 2002.

In its history, Texas has made five trips to the Women’s College World Series. Three of those appearances were made with Osterman in the pitching circle.

“When she took to the circle, she was just unstoppable and amazing to watch,” said Del Conte, Texas’ athletics director. “It’s a special, special honor to have your jersey number retired, and no one is more worthy of that than Cat. She continues to make us so proud long after her time on the Forty Acres.”

Osterman retired from competitive softball in 2015 but is in the midst of a comeback with Team USA. She is one of four pitchers on a national team that will compete at the Tokyo Olympics this summer. Osterman won a gold medal in 2004 and a silver medal four years later.

Osterman has also served as an assistant coach at Texas State for the past five years. Due to the Olympics, she will take a leave of absence this season.