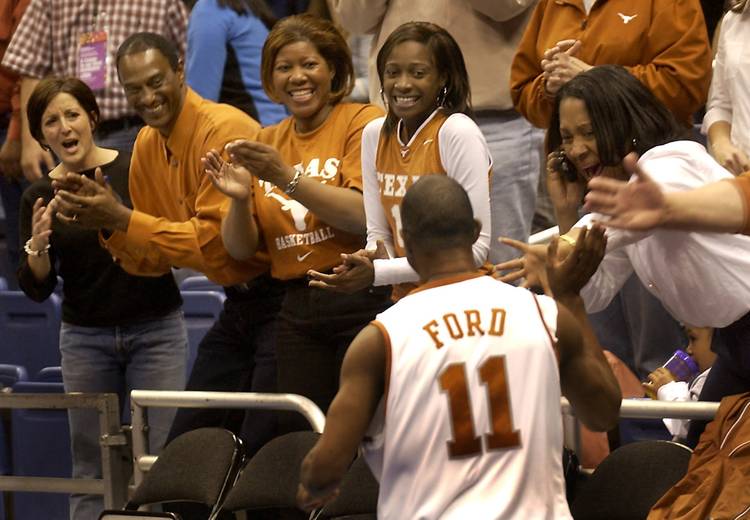 T.J. Ford runs over to greet this family after Texas beat Connecticut at the Alamodome in San Antonio on March 28, 2003. (Ralph Barrera AMERICAN-STATESMAN)

Throughout Black History Month, the American-Statesman will take a daily look at the black athletes who have had a lasting impact in Texas’ athletic department. Today, we are writing about basketball player T.J. Ford.

Recruited out of Houston, Ford made an immediate impact at Texas when he became the first freshman to lead the nation in assists. The following season, Ford led Texas to the 2003 Final Four while winning the Naismith and Wooden Awards. Ford left Texas after his second season but his 527 career assists still rank second at UT.

Ford wore No. 11 during his two years with the Longhorns. In 2004, Ford became the first basketball player to have his jersey retired at Texas. The Texas men have since retired Slater Martin’s No. 15 and Kevin Durant’s No. 35 jerseys while the women have set aside Kamie Ethridge’s No. 33 and Clarissa Davis’ No. 24.

Ford was selected by Milwaukee with the eighth pick of the 2003 NBA Draft. He went onto play for four teams over eight seasons. Ford later returned to school and received a degree in Youth and Community Studies in 2017.