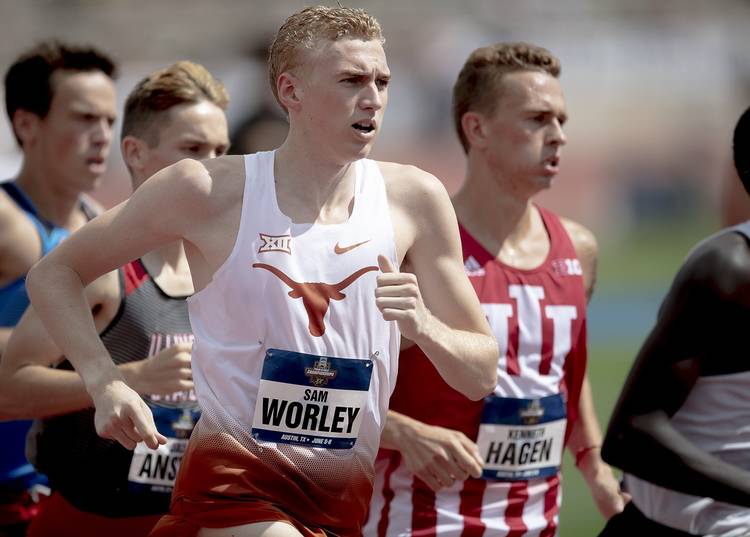 Texas distance runner Sam Worley competes in the 1500-meter run at the NCAA track and field championships on June 5, 2019 in Austin. [NICK WAGNER/AMERICAN-STATESMAN]

Texas junior Sam Worley will miss the rest of the indoor track and field season after fracturing his tibia at a meet in Seattle.

Worley discussed his injury on his Instagram page on Tuesday. He was injured while competing in the men’s mile at the Husky Classic this past Saturday.

In a statement, Texas confirmed that Worley’s indoor campaign is over. The NCAA’s indoor season runs through March 14. Texas did not provide an update regarding Worley’s status for the outdoor season.

Finally headed back to ATX after fracturing my tibia while competing in the mile this past Saturday. Although this process has been difficult it’s been made so much better by the endless support, prayers, and kind messages from family, friends, teammates, and the entire running community. Special thanks to @juicemeister_ and the UW men for going above and beyond with the hospital care package. I’ve only taken my first steps on the road back to running but the process is already looking bright thanks to all the people I’ve got in my corner. Can’t wait to be back out there doing the sport I love. #Hookem #TexasFight

As a sophomore, Worley earned All-American honors during the indoor and outdoor seasons. During the fall, Worley was the top finisher among the Longhorns at the NCAA’s cross-country meet. He placed 27th out of a field of 252 runners.