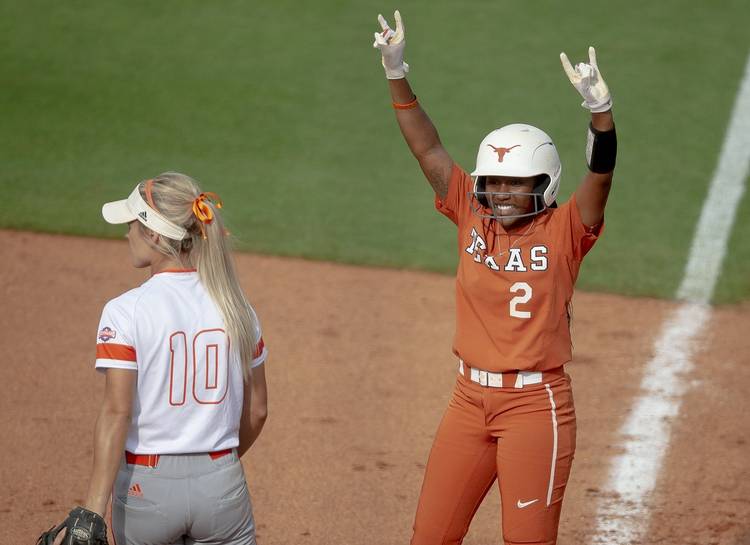 Texas infielder Janae Jefferson (2) celebrates a base hit against Sam Houston State on, May 17, 2019 in Austin. [NICK WAGNER/AMERICAN-STATESMAN]

Throughout Black History Month, the American-Statesman will take a daily look at the black athletes who have had a lasting impact in Texas’ athletic department. Today, we are writing about current softball player Janae Jefferson.

Jefferson is only a junior so she has yet to finish writing her chapter in UT’s history book. Still, Jefferson is already one of five two-time All-Americans to ever suit up for Texas’ softball team. She is also on a pace to become the one of the Longhorns’ greatest hitter of all-time.

Jefferson opener her freshman year with an eight-game hitting streak, and the Humble-raised infielder has not stopped swinging. Through the first 137 games of her career, Jefferson has recorded a school-record .416 batting average. With 178 career hits, Jefferson might even challenge Brejae Washington’s status as Texas’ hits queen (254 hits) by the end of this season.

So far this year, Jefferson’s .558 batting average leads both Texas and the Big 12. Texas (15-1) will host a doubleheader against nationally-ranked Louisiana on Tuesday.

Texas’ past and present will collide on Tuesday at McCombs Field. UT is set to honor the softball program’s first three black athletes as part of its “History Makers” series. Tamar Bismillah, Kedra Ishop and Aimee Swann all played for Texas when it was a club team in 1996.