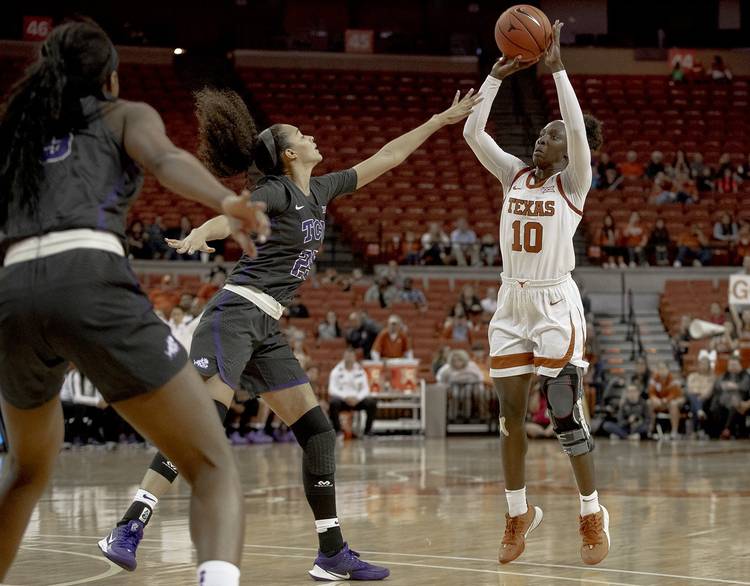 About the series: Texas leads 44-4

About the Longhorns: With four games left in the regular season, Texas is the Big 12’s third-place team. The Longhorns are three games behind second-place TCU and only a game up on Iowa State and Kansas State. … In conference play, Texas is 3-4 at home and 5-2 on the road. … Collier currently boasts team-highs in scoring and rebounding. The last player to lead the Longhorns in both of those categories was Kelsey Lang during the 2014-15 campaign. … Reserves Audrey Warren (undisclosed medical issue) and Shae Routt (ankle) missed UT’s loss to Kansas State on Saturday. Warren is listed as probable for Wednesday’s game while Routt has a day-to-day designation.

About the Horned Frogs: On Monday, TCU checked into the AP poll for the first time this season. The Horned Frogs were last ranked in 2018. … Ray, who attended Austin’s Bowie High, has the fifth-most career assists (391) and career blocks (126) in TCU’s record books. Ray became the 20th member of TCU’s 1,000-point club in January. … TCU’s leader in scoring, rebounding and assists, Heard was named the Big 12’s player of the week for the second time on Monday. Heard’s older brother, Jerrod, played football at Texas from 2014-18. … TCU has already won a school-record 11 Big 12 games this season. One of those wins was a 65-63 victory in Austin on Jan. 3.