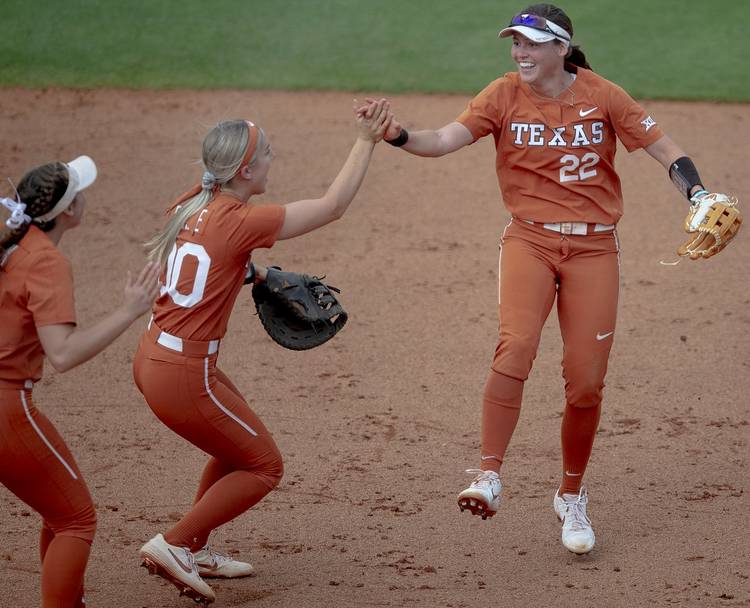 Texas outfielder MK Tedder (22) celebrates with teammate Lauren Burke (00) after throwing out a Sam Houston State runner on May 17, 2019 in Austin. [NICK WAGNER/AMERICAN-STATESMAN]

On Tuesday, Texas found itself looking up at two teams it had recently beat.

For the second straight week, Texas has been ranked third in the NFCA’s national poll. Texas (20-3) received its first two first-place votes of the season, and its 738 total points trailed only the 793 points gathered by UCLA (19-1) and the 766 points earned by Washington (19-2). Oklahoma, Oklahoma State and Baylor, which were ranked sixth, 14th and 21st, joined Texas as the Big 12’s representatives in the poll.

Both Texas and the American-Statesman have traditionally observed the NFCA poll when discussing rankings. This week, Texas did climb to No. 1 in Softball America’s poll. The Longhorns trail only UCLA in the rankings done by both USA Softball and D1Softball.

Starting with a 2-1 win over No. 10 Louisiana at McCombs Field this past Tuesday, Texas beat four ranked teams in a five-day span. The Longhorns opened a trip to California with back-to-back wins over UCLA and Washington. UCLA and Washington were ranked first and second last week.

UT also shutout No. 13 Michigan this past Saturday, but an impressive week was not without blemishes. Louisiana split its doubleheader with the Longhorns, and Fresno State bested Texas at the Judi Garman Classic in California. Now ranked eighth and 25th by the NFCA, Louisiana and Fresno State both beat Texas by one run.

On Tuesday, the Big 12 announced that Texas’ Lauren Burke and Shea O’Leary had been named the conference’s player and pitcher of the week. Texas has four games on this week’s schedule. UT will host Liberty (7-11), Texas Southern (7-10) and New Mexico (10-10) at a Longhorn Invitational that begins on Friday.