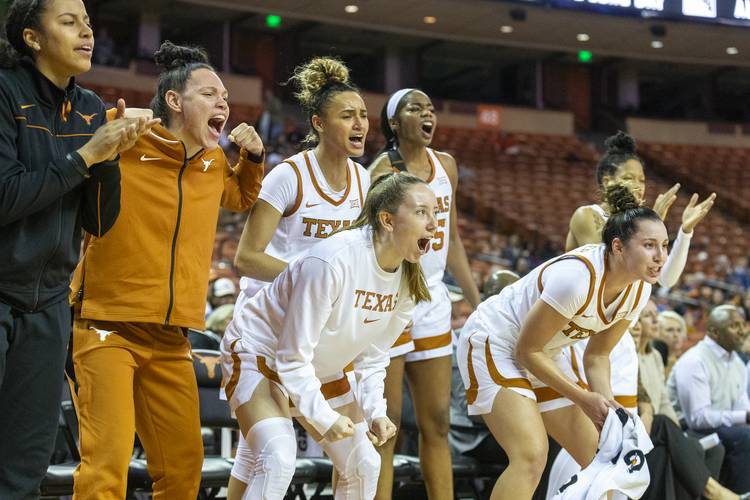 The Texas bench celebrates a basket against UTSA in Austin on Nov. 14, 2019. [Stephen Spillman for Statesman]

For the second time in the past 11 months, Texas has welcomed a Nittany Lion into its pride.

Penn State forward Lauren Ebo announced on Monday that she will join the women’s basketball team at Texas. A 6-4 junior-to-be, Ebo averaged 5.3 points and 4.8 rebounds per game this past season for a 7-23 Penn State team. Her verbal commitment is the first given to new Texas coach Vic Schaefer, who spent the past eight seasons at Mississippi State.

At Texas, Ebo will be reunited with former Penn State teammate Karisma Ortiz. After sitting out this season following her transfer, Ortiz will be a sophomore guard on UT’s roster next season. Penn State started both Ebo and Ortiz during seven of its games during the 2018-19 season.

A new opportunity. God is the greatest! #HookEm 🤘🏽🖤 pic.twitter.com/JQa3zdLaYO

Time will tell if Ebo gets to play for Texas during the 2020-21 season. Since Ebo is arriving as a transfer, she must have a waiver approved by the NCAA. The NCAA, though, is currently considering a one-time transfer exception for all athletes.

If Ebo is eligible next season, she will fill a void created by the graduation of senior forward Joyner Holmes. Schaefer inherited a seven-player roster that only has one player — rising junior Charli Collier — who is taller than six feet. Precious Johnson and Elyssa Coleman, who are two of UT’s five incoming signees, also stand 6-5 and 6-3.

Ebo hails from Washington, D.C.  ESPN Hoopgurlz rated her as the 17th-best post in the 2018 recruiting cycle.